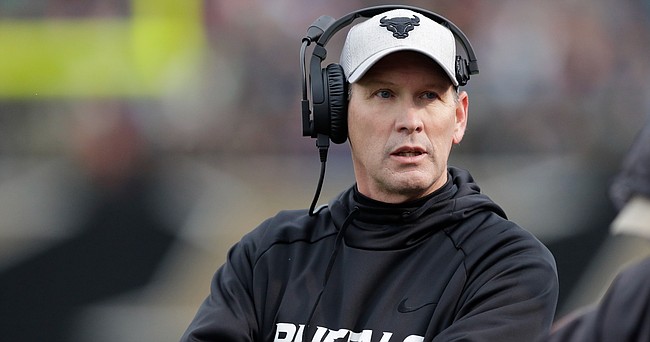 Newly hired University of Kansas football coach Lance Leipold is shown in this Nov. 19, 2016, file photo, during a Buffalo game against Western Michigan, in Kalamazoo, Mich.

When Lance Leipold became the new head football coach at the University of Kansas, he signed a six-year contract that will pay him an average of $2.75 million per year.

The deal for the Jayhawks’ new coach, which will pay him $16.5 million in total, includes a pay increase each year. So although Kansas Athletics Inc., agreed to pay Leipold $2.2 million for his first year on the job, if the former Buffalo head coach is still in Lawrence in 2026, he’ll see that number grow to $3.3 million in his sixth year.

The $2.2 million Leipold will make this year is less than any Big 12 coach was paid in 2020, per USA Todays database of NCAA head coaches salaries. Kansas State’s Chris Klieman made $2,323,958, the lowest figure among the Big 12’s coaches (Baylor’s salary for Dave Aranda wasn’t published). KU paid Les Miles $3.3 million in what proved to be his final full year with the program.

KU published the terms of Leipold’s contract for the first time Sunday night, after announcing the hire on Friday. Leipold’s base salary is set at $500,000 per year. But his income from the deal gets hefty boosts with annual personal services payment beginning at $1.36 million a year, as well as a yearly royalty payment of $340,000. 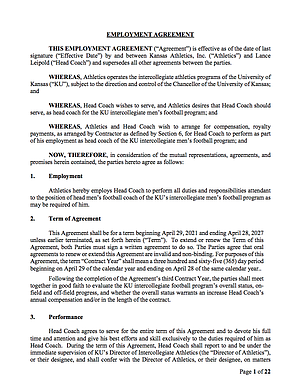 Leipold’s personal services payment, for his multimedia services, which include educational, public relations and promotional duties assigned by the athletic director, increases by $200,000 each year of the contract — except for the fourth year, when it goes up by $300,000.

If KU wanted to fire Leipold without cause, KAI would owe him 70% of his remaining salary (base salary, professional services and royalty payments) on the six-year deal.

The contract also includes a number of potential incentive payments, tied to the Jayhawks’ potential success.

Leipold would get a bonus payment for each of the following scenarios:

• $75,000 for a single year Academic Progress Rate equal to or greater than 970 (first eligible to earn the incentive in September of 2022)

The potential bonus scenarios are cumulative, so in theory Leipold could get $150,000 for KU playing in the Big 12 title game and then get another bonus payment for the bowl invite that followed.

If at some point KU, the Big 12 or the NCAA found Leipold to be committing “repetitive or intentional” rules violations “or a pattern of conduct which may constitute or lead to a major NCAA violation,” KU could suspend the coach without pay or terminate him for cause. The contract states KU also could take such action if violations by the coach occurred at one of his previous jobs.

I like this contract. The 654321 buyout ensures Leipold shouldn't be going anyway soon and the 70% without cause should free Leipold of admin and donor interuptus to just go and do his job they way he wants and needs to. To me, unless someone can show me some holes, is encouraging!

I didn’t realize everyone was getting $2M+.

$11+M guaranteed regardless of the results on the field.

Money Talks! It is perfectly clear (now) that Leipold received a contract offer, that he had to take! A 3X Salary Increase!

The highest paid MAC Coach is Jason Candle at Toledo at 1.1 Million annual, and Frank Solich is content to make "only" $600,000 annual. Of course, Ohio whipped KU at Peden Stadium a few yeas ago (I was an eyewitness).

As for the Buffalo Bulls, the Interim Head Coach is Rob Ianello. The name sounded familiar to me. I looked Rob up (Wikipedia) and yes, he spent 1 year at KU, asst. to C. Weis!

Coming back to re-read I see the biggest complaint and hole is Leipold getting 3X as much as before, $2 Million annual guaranteed no matter the win loss record. Well I have to say, unless there is cause, we shouldn't be thinking of firing Leipold until at least 4 years anyway. During which time he earns below league average. In 4 years, the buyout would be around $4 million. And you would hope that HCLL can have a winning season by then and wouldn't just take a 4 year payday to ruin his record and KU football even more than it already is..