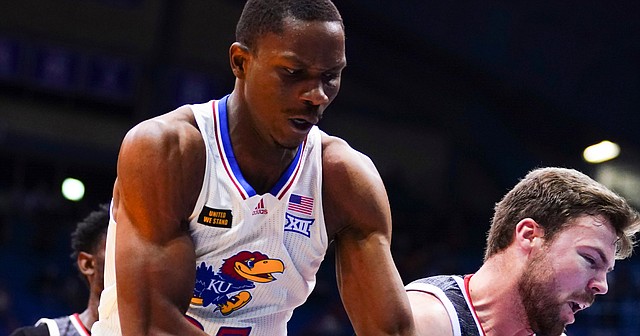 For the third consecutive day, a member of the 2020-21 Kansas men’s basketball team added his name to the transfer portal on Wednesday.

Freshman forward Gethro Muscadin becomes the latest Jayhawk to decide to head elsewhere, joining wings Tyon Grant-Foster and Tristan Enaruna who put their names in the portal earlier this week.

“We recruited Gethro to come in and be a contributor for us over time,” Kansas coach Bill Self said in announcing Muscadin’s decision to leave on Wednesday. “He certainly got better daily during practice and was a terrific practice player. With the rules being such, with guys getting the year back, Gethro sees it’s in his best interest to look into some other opportunities and we totally support and agree with that decision.”

Muscadin’s departure opens up another spot for Self and company to fill.

A native of Haiti who played prep ball at Aspire Academy in Kentucky, the 6-foot-10, 220-pound Muscadin appeared in 10 games for the Jayhawks this season, scoring two points and grabbing nine rebounds.

Although he was never expected to be a part of the Jayhawks’ rotation as a freshman, Self said Muscadin’s future remained bright.

“If he continues to progress, gets stronger and keeps his athletic ability like it is now, he’s going to be a really good player,” Self said. “We certainly wish him the very best and know that he will be successful and he knows that we’ll always cheer for him.”