Behind gutsy performance from David McCormack, Kansas escapes with 93-84 win over Eastern Washington in NCAA tourney 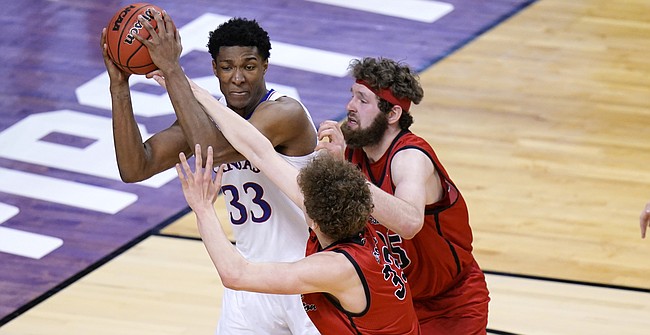 Eastern Washington forward Tanner Groves (35) is pressured by Kansas guard Christian Braun, left, and Kansas guard Bryce Thompson (24) as he goes up for a shot during the second half of a first-round game in the NCAA college basketball tournament at Farmers Coliseum in Indianapolis, Saturday, March 20, 2021. (AP Photo/AJ Mast)

Indianapolis — After coming off the floor for the final time during Saturday’s 93-84 first-round victory by third-seeded Kansas over No. 14 seed Eastern Washington, KU junior David McCormack climbed every step of the risers near the Kansas bench to hand out high-fives to each teammate, coach and manager.

The KU big man followed a similar routine whenever he checked out during his 25 monster minutes off the bench in Saturday’s win that sent Kansas (21-8) to Monday’s second round.

And on each occasion, he made sure to spend a little extra time with KU trainer Bill Cowgill, who had the words “Monitor McCormack” written at the top of his proverbial to-do list for the better part of the past week.

After the victory, Kansas coach Bill Self said he had not planned on playing McCormack as much as he did, given the fact that the 6-foot-10 junior had just rejoined the team a day earlier after battling COVID-19 for the past two weeks. 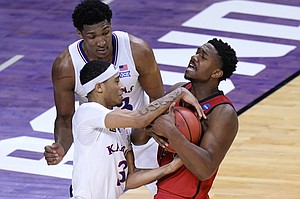 But it was evident early on that Kansas needed him, both as an option on offense and to provide some resistance down low against EWU big man Tanner Groves, who scored a game-high 35 points and had his way with the five or six other Kansas players who tried to stop him.

So McCormack gutted it out, did as much as he could and proved to be the difference between KU moving on and going home early.

“Getting our big man back was huge for us,” KU senior Marcus Garrett said of McCormack after the victory. “His presence means a lot to us. He definitely brought us energy. From the time he arrived (Friday), we felt his energy, we felt his presence. He was just happy to be with us and he was happy to be back on the court.”

There were times when McCormack labored. His lift, both as a rim protector and in the post, appeared to be affected by fatigue. But a lot of that went away in the second half, when the junior from Norfolk, Va., scored 20 of his 22 points, calling for the ball on every possession and attacking the rim like the season was on the line.

“After the way he started the game, I didn't think that he was going to give us much offensively or defensively,” Self said. “But he kind of got his legs under him, and he was really, really good the second half. I mean really good.”

Although he participated in just 70% of KU’s Friday practice in Indianapolis — his first with the team in nearly two weeks — all of the signs pointed to McCormack being OK to play.

“We hooked him up to a heart monitor, we evaluated him during our practice. He looked good,” Self said. “We took him out, we sat him, all these things. We had a pretty good gauge of his fatigue.”

After going through warm-ups with his usual gusto, McCormack started Saturday’s game on the bench. It was there that he watched Eastern Washington (16-8) race out to a 9-0 lead as the Jayhawks missed their first four shots and looked a little flat-footed defensively.

Two minutes into the game, he checked in for starting forward Mitch Lightfoot.

The move did not immediately pay dividends, but it did change the way Kansas played and helped Kansas claim control midway through the first half.

The Jayhawks’ first lead came on a Garrett tip at the 14:08 mark and KU went up by as many as seven — on a Garrett 3-pointer — before EWU revisited what worked early.

Despite the deficit, Garrett said the Jayhawks remained calm.

“We know what type of team we are,” he said. “We know if we lock in and defend that we can cut the lead and come back, and I feel like when we locked in defensively we were able to do that.”

McCormack and Harris both started the second half for Kansas, and their defensive presence and offensive production helped Kansas overcome a 10-point deficit (52-42) in the game’s final 18 minutes.

“That’s when panic could set in and it didn't,” Self said. 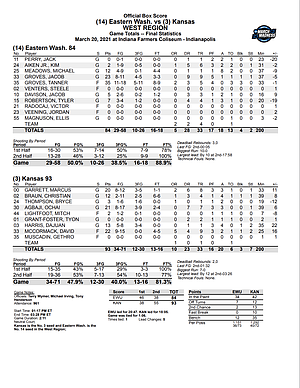 KU did not get all the way over the hump until Harris drilled a wide-open 3-pointer with 9:48 to play that put the Jayhawks ahead 64-63.

The teams then traded buckets and entered the final 9 minutes tied at 66. That’s when McCormack took over, scoring 12 of his 22 points to make sure Kansas was the last team standing.

He scored back-to-back buckets in the paint on KU’s next two possessions and then added a pair of free throws to extend the Jayhawks’ lead to 75-68 with 6:06 to play.

Moments later, after a pair of Garrett 3-pointers, McCormack delivered the knockout blow, hitting a jump hook just below the free throw line that put Kansas up 85-73 with 3:26 remaining.

After saving his energy for the glass (9 rebounds, 5 offensive) and the defensive end for most of the day, McCormack let loose with a wild celebration as the whistle blew on the jumper.

He missed the free throw that followed, but the damage had been done and the message sent. The Eagles never came closer than seven points after that, which provided Self with a dual-sense of relief and pride.

“We’re just thrilled that we won,” he said. “It was a great game to win in the tournament. It’s great to advance. But we got outplayed for the majority of the game today. They were better than us. And somehow we just kind of hung in there and made some plays at the right time.”

Garrett, who said everyone in the Kansas locker room remained calm and focused during the halftime break, tossed some of the credit for that to his head coach.

“It’s coach Self. He was telling us every time out, ‘It's a long game, just stay with it, keep chipping away at the lead and we'll get it where what we want it.’”

Even though it wasn’t their best outing, that was exactly the way it played out, and the Jayhawks advance to Monday’s second round, where they’ll meet the winner of today’s 6-11 matchup between USC and Drake at a time and place that have yet to be determined.

Analytics have become common place in all the major sports now days . Self had a decision to make .... ....." the analytics say limit Mccormacks minutes on the floor to help his recovery process and have him for the next game given the Jayhawks were expected to win" ................" or analytics be damned..... what gives us the best chance to win " Not to dismiss DMacs health.... his input and honest assessment of how he was feeling also determined his playing time........ . DMac was going to play , he was not going to let his team down ,and Self was full aware of that ...............win or go home everyone on the team knew that. Self rolled the dice by resting Embiid during the tourney when Embiid was nursing an injury..but he could have played but Self chose to rest him ......." analytics " ....had us favored we were a better team than Stanford ........We lost to Stanford with Embiid resting on the bench.................Self was not going to let that happen again........Dmac definitely played

It was great to see KU's poise as it came back to win, but let's be honest: we were also lucky that EWU stopped going inside to Groves. We hadn't come up with any way to stop him all day, when all of a sudden he started shooting almost exclusively from outside. It's like they completely forgot what had gotten them to that point.

Anyway, to quote the cliche, it's all about survive and advance, so I'll take it. (OTOH, I hope to God we don't end up "winning" the way Oregon did today. I'd rather lose than advance like that, as it would make the entire thing tainted.)

“Embiid could have played” but then missed an entire year because of the injury. Completely different scenarios. Also really different in that 75% of our front court players were out before David’s return - apologies to Gethro, who’s not ready for prime time.

He didn’t play due to so called back issues. He missed a year due to a foot injury. Come on.

survive and move on

Haven’t seen anybody as conditioned as Kansas so far except maybe Zags and Illinois.

So glad David McCormack was available and played well in the second half, otherwise KU would be another storyline for the 2021 NCAA Tournament. A #14 seed beating a #3 seed is still a relatively rare event (~15% of the time). Up until last night when Texas lost to Abilene Christian (so sad for Smart - not really), only twenty-one 14 seeds have upset a 3 seed since 1985. Also a huge shout out to Dajuan Harris. Bill why is Dajuan not starting from the tip? Yes, we have heard for ever that "it doesn't matter who starts but who finishes the game". For your blood pressure (and your fan base), you might want to get out to a better start next game. You were quite red at your first time out. It is apparent from all of us arm chair coaches that the offense (and defense) flows so much better with Dajuan at the point. Case in point, the team was -12 with Thompson who started and was plus 22 when Dajuan was in the game. The next closes player was David at plus 16. Please stop the terrible starts and go with the most effective 5 from the tip. Rock Chalk.

Huge props to the Groves brothers. Wow, those two played like beasts. Fortunately for us, the rest of their team was almost non-existant.

It's a team sport. It's not the Mountain West anymore for them. It was a great performance for the big guy. With that said, the 'Hawks executed very well in the 2nd half and played loose and with confidence. Even with the real game pressure on them, KU was poised.

Ummm, EWU is in the Big Sky, not the Mountain West. Thanks for playing, though...

Okay. I was wrong on the conference, but it's not the Big Sky anymore either is it? Or do you still want to be pretentious?

The Eagles played a style that was tough to defend. That is a smart, well-coached team. Whew!

Did anyone else think the pullovers that the coaching staff wore during the game (and HCBS wore during the post-game pressy) were a strange color? Not crimson, not even bright red, but orangish? Odd in my opinion.

So much for Grant-Foster seeing much time. Although he did get 2 boards in his 1 minute on the floor, he turned it over with a usual run over the defender plus the fouls call. It appears, both he and Enaruna are non contributors in this tournament.

Loved our energy and defensive prowess. Harris and Garrett together are awesome, now on both ends.

Enaruna was not dressed out Saturday because of COVID protocol.