Kansas guard Aniya Thomas battles for a rebound against Iowa State on March 3, 2021, at Hilton Coliseum, in Ames, Iowa.

The Kansas women’s basketball team’s losing streak hit seven games Wednesday night at Iowa State, where the Jayhawks suffered their most lopsided loss of the skid, 83-53.

After a recent string of more competitive setbacks — their previous largest margin of defeat in the streak was 11 points at Kansas State on Feb. 13 — the Jayhawks lost by 30 for the first time since they played at Baylor a month ago.

KU also encountered problems on the boards, as ISU dominated in rebound margin, 54-32.

“Thought we got outcompeted on the glass,” Kansas head coach Brandon Schneider said during his postgame video press conference. “Just didn’t finish possessions. I thought we had a lot of possessions where our first shot defense was more than adequate and we just couldn’t secure the rebound.” 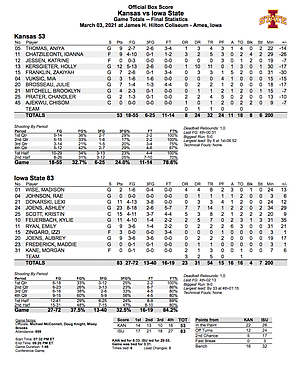 ISU’s 23 offensive boards — Ashley Joens had seven of her 14 rebounds on that end of the court, contributing to her game-high 23 points — led to 17 second-chance points for the Cyclones.

“They had multiple offensive rebounds within the same possession far too often,” Schneider lamented after his team finished with just 24 defensive boards.

While in recent losses, KU often battled back from deficits, even in the second halves of games, the Jayhawks couldn’t get rolling in the third quarter, which they entered down 11 points.

KU shot 3-for-14 in the third, despite opening the second half on a positive note, with a Holly Kersgieter 3-pointer.

ISU’s eight point lead in the opening minute of the third ballooned to as many as 21 later in the period.

“They did a really good job of defending the paint and plugging all of our dribble penetration,” Schneider said of ISU keeping KU out of reach in the second half.

The Cyclones started to get away from the Jayhawks late in the second quarter, following a short-lived three-point lead for KU on a layup by Kersgieter, who led KU with 12 points and 11 rebounds.

In the five minutes that followed, KU only scored one more time, on a Zakiyah Franklin layup, while the Cyclones closed the half on a 16-2 run that put the Jayhawks in a 38-27 hole at intermission.

In the final five minutes of the half, the Jayhawks shot 1-for-9 from the floor and committed a pair of turnovers.

The Jayhawks are set to close the regular season on Saturday at Allen Fieldhouse, when No. 6 Baylor (20-2, 15-1) comes to town.