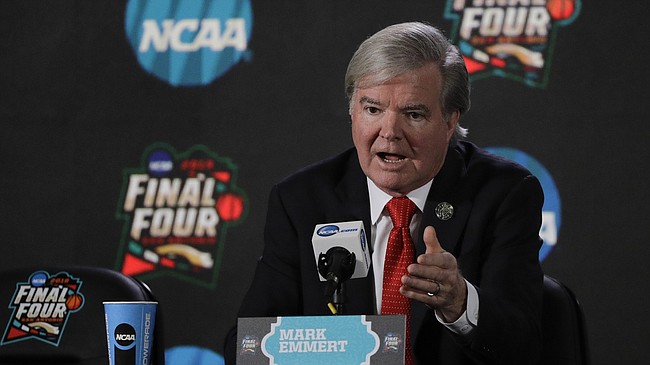 So after months if not years of the players and schools asking the ncaa to do something, the head of the ncaa is now threatening to act?

Leadership at its best {sarcasm off}.

The hair reminds me of another person in charge who had no clue.

A good rule to follow is that if they guy in charge is working to manage his hair, then you have the wrong guy.

The NCAA should just close its doors if they can't handle it. Uniform standards should not be set by the Federal Government. The uniform standards should be set by the NCAA. The Federal Government has no business setting college sports atheltic standards. It is not their job. If the NCAA can't figure it out then the NCAA should fold and they can just lost their jobs due to incompetence. Period...end of subject.

Train meet Wreck. I like the idea of NIL, but this is about money. That means taxes, it means young people at risk of losing their money, it means knowing how to manage their new wealth. Unless guardrails are in place to protect these "student" Athletes this is going to be a mess. The NCAA is the last group who should be in charge of this. They can't be trusted to do anything but turn this into a dumpster fire. If you think bad grades can distract a college athlete, try losing their money on for size. These athletes need to be setup like a pro player, that means agents, accountants, and or advisers. Whoever these folks are they are going to want a cut, just like it is in the pros. I wonder if Coach is prepared for a player needing to take a call from their agent during practice? :) "Fasten your seat belts, it's going to be a bumpy night"

How does NIL advance amateur athletics? If you profit from your celebrity as an athlete you’re not an amateur anymore. Pay for your own tuition, or go be an actual professional athlete, but most can’t because the school they play for is the actual reason the celebrity exists in the first place. This all just cheapens collegiate athletics. As this has continued on I’ve not been able to understand how seemingly no administrator has had the fortitude to stand up to this. Athletic departments and administrators are so corrupted by money that they’ve completely lost track of their real mission and responsibility. This simply continues the slow creep towards the end of collegiate amateur athletics.

This guy is a clown. So after years of bitterly fighting this, and damning any athlete who dared speak (hello, Ed?), this guy is suddenly their champion? For real? Is banned substance testing about to be handled by Lance Armstrong and Barry Bonds next?

If the colleges and universities had any character and fortitude they would realize they should end intercollegiate athletics and focus on education. Of course, most of them are a joke for an education. What should one do? Go to another country to get a real college education.

Face it, most college football and basketball players are stooges. This is evident by the fact that three out of four professional basketball and football players are broke five years after their last game. They may have a grade point average, but their chosen field of study or a total joke.

American colleges and universities are, in general, a bunch of hypocritical stooges. One shouldn’t expect the athletic departments to be anything more.

Exactly. If I were the NCAA I would just transfer all these players to the D league.