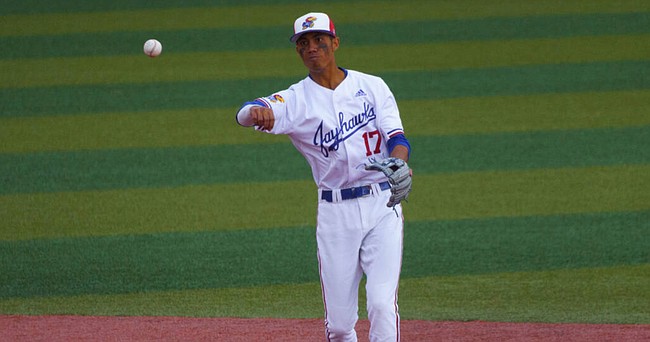 KU freshman Maui Ahuna fires to first base during a KU game in the 2021 season. Ahuna recently earned honorable mention all-Big 12 honors and was named to the Big 12's all-tournament team.

The Kansas baseball team was only at the Big 12 tournament for one day last week, but that was long enough for freshman shortstop Maui Ahuna to make his presence felt.

Ahuna was the lone Jayhawk named to the Big 12’s all-tournament team after tearing up West Virginia in the conference play-in game last Tuesday.

The Hawaii native went 4-for-5 with 2 triples and his first career home run in that game, which the Jayhawks lost 8-7 to end their season.

Ahuna, who earned honorable mention all-Big 12 honors for the season, became the first Jayhawk with two triples in a game since Brett Vosik in 2019 and the first KU player named to the all-tourney team since Skyler Messinger in 2019.

For the season, Ahuna finished with a .314 batting average and 11 doubles, three triples, one home run and 25 RBIs. He also recorded eight stolen bases in nine attempts.

“For him to go out and play as good as he did this year as a freshman, he's just scratched the surface of his potential,” KU coach Ritch Price said of Ahuna after last Tuesday’s loss. “His baseball IQ is improving (and) he has a skill set that’s as good as anybody in America.”