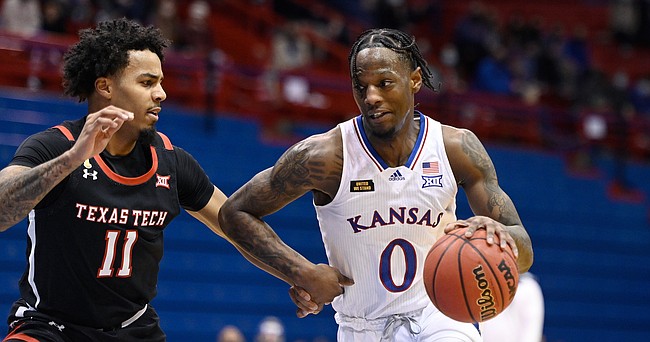 Kansas senior Marcus Garrett attempts to drive past a Texas Tech defender during a game against Texas Tech Saturday afternoon in Allen Fieldhouse on Feb. 20, 2021. Photo by Mike Gunnoe.

Garrett watched Thursday’s draft at his home in Dallas with his mother and a small group of family and friends.

As soon as the 60th pick was made in Thursday’s draft, news came rolling in about some of the players who went undrafted signing free agent deals with various NBA clubs.

That’s the route that Garrett likely will go (and may already have gone depending on when you’re reading this).

That path will provide him a roster spot at the Las Vegas Summer League, where, if he shows well, he could play his way into a two-way contract with an NBA franchise and its G League affiliate.

One person who will not be betting against Garrett making an NBA roster in some capacity is Kansas coach Bill Self.

The 2019-20 Naismith Defensive Player of the Year ended his career with 181 steals in 129 games, which tied him with Adonis Jordan for 10th on KU’s all-time steals list.

great kid but given today's NBA i think it is going to be tough--that said, watching the finals Jrue Holiday and Erick Tucker's biggest contribution was on the defensive side of the ball. Regardless, he is positioned to have a wonderful professional career somewhere.