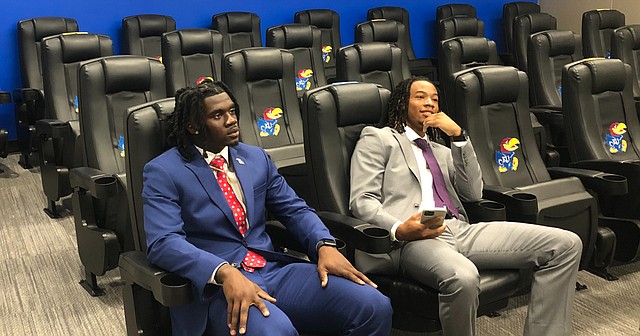 Kansas football players Kenny Logan Jr., left, and Kwamie Lassiter II sit inside the team auditorium while waiting for virtual media sessions at Big 12 Media Days to begin on Thursday, July 15, 2021. Lassister and Logan missed out on the opportunity to be in Dallas with the rest of the conference's representatives because of bad weather grounding their flight.

The Louisville Sports Commission announced Logan is one of the 57 players in the running for this year’s Paul Hornung Award, presented to college football’s most versatile player. Meanwhile, Lassiter’s name appeared on the newly published watch list for the Wuerffel Trophy, presented to the FBS player who best combines community service with leadership achievement on and off the field.

The KU defense’s leading tackler in the Jayhawks’ abbreviated nine-game 2020 season, Logan made 58 total tackles and led the team with two interceptions. Logan’s breakthrough sophomore season also included a 100-yard kickoff return for a touchdown, among his 13 returns on the year, as he averaged 26.5 yards an attempt.

Now a 6-foot, 195-pound junior, Logan even played a little bit of offense for the Jayhawks during their spring game earlier this year — though it remains to be seen whether new head coach Lance Leipold and his staff will deploy the veteran from St. Augustine, Fla., on that side of the ball.

The leading receiver for KU’s offense in 2020, Lassiter’s production (43 receptions, 458 receiving yards and two touchdowns) wasn’t what got him on the Wuerffel watch list, along with 92 other candidates nationwide.

After emerging as a team leader in the offseason this year, Lassiter also has remained active with the KU football program in the Lawrence community this summer. Some of those off-the-field activities have included cleaning up trash downtown, playing with children while teaming up with Lawrence Parks and Recreation and Lawrence Public Schools and participating in Meals on Wheels outings.

Former KU receiver Stephon Robinson Jr., who transferred to Northwestern this past winter, following an injury-plagued 2020 season with the Jayhawks, also made the Hornung preseason watch list.