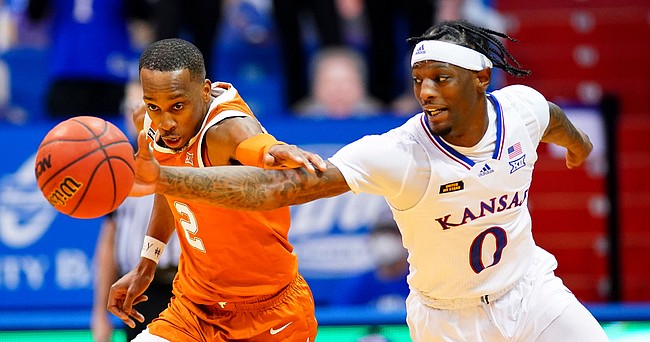 For former Kansas basketball standout Marcus Garrett, years of dreaming and imagining life as a professional basketball player have come down to a single night.

Thursday night, when the 2021 NBA draft plays out in Brooklyn, N.Y., Garrett and a host of other NBA hopefuls will find out if they are among the 60 players selected in the two-round draft that begins at 7 p.m. on ABC and ESPN.

Hearing his name called at the podium is something Garrett, 22, recently said has been “a dream since I was little.” But the former national defensive player of the year and KU star knows that his path to a spot on a professional roster is not limited to what happens Thursday night.

“To be on a team, that’s my goal,” said Garrett following a workout with the Golden State Warriors earlier this month. “That’s my dream to play in the NBA. So, if I’m able to be on an NBA team that would be a dream come true. Getting drafted would be a blessing. But if it doesn’t (happen), I know the world isn’t over.”

Over the past several months, Garrett has worked out for about a third of the NBA’s 30 teams. At each workout, he tried to lead with his defense and show scouts that his offense — particularly his jump shot — was where it needed to be.

“That’s kind of what I live on,” he said of his defense. “I feel like I can defend at a really high, elite level.”

Those who watched Garrett closely in college already knew that defense had always been his top priority and best skill. And those teams who have scouted him ahead of the draft have seen plenty of evidence of his ability to defend multiple positions. 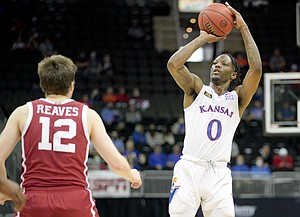 Kansas senior guard Marcus Garrett attempts a 3-pointer versus Oklahoma during the Phillips 66 Big 12 Basketball Championship at the T-Mobile Center in Kansas City, Missouri on March 10, 2021.

What most scouts wanted to get a closer look at, however, was the status of his perimeter shot, which Garrett said had improved a lot since his KU career ended.

The various mock drafts out there have been mixed on Garrett’s draft status.

All it takes is for one team to like him enough to write his name on their draft card. If that happens, it almost certainly will come in the mid-to-late second round. It also would make him the 27th player drafted into the NBA in KU coach Bill Self’s 18 seasons at Kansas.

But even if it doesn’t happen, Garrett still figures to have a shot at making a roster.

The 6-foot-5 former Jayhawk is a virtual lock to land on a roster at the Las Vegas summer league. And his play there, if impressive enough, could earn him the opportunity to play on a two-way contract with an NBA franchise and its G League affiliate.

Even if Garrett gets drafted, he likely will head to Vegas to start his professional journey. When he gets there, the Dallas native will be focused on doing whatever he can to catch the eye of an NBA team looking for a player who will give everything he has for the chance to join a league that will test his defensive prowess to the highest degree.

“All the people that the world says is great, those are the guys I want to be matched up against,” Garrett said with a smile.

Well, if no team has given MG a heads-up that he might be drafted in rd2, he/agent should be teeing up his options and explore the best option he should explore as soon as it is over.

Is defense that highly valued in the NBA?

It is by the Warriors. Within the big picture, that is.

I think Marcus would be a good player for NBA teams to have with his elite defense skills. I'm sure there are times that could be used. You got this Marcus!