KU’s nonconference meeting with St. John’s pushed back one day 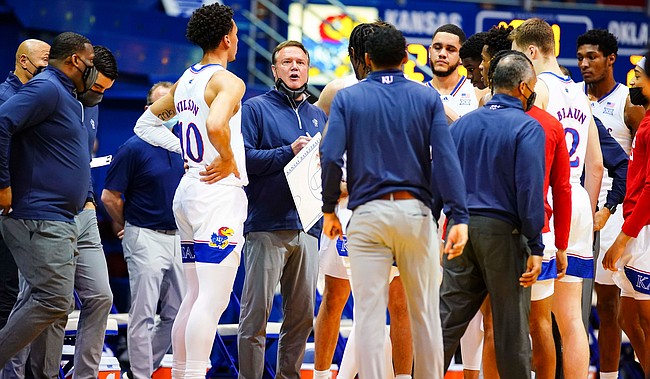 Kansas head coach Bill Self huddles the Jayhawks together during a timeout in the first half on Monday, Feb. 8, 2021 at Allen Fieldhouse.

A nonconference matchup between the Kansas men’s basketball team and St. John’s will take place one day later than expected.

The Big EAST-Big 12 Battle of Kansas at St. John’s has been moved to Friday, Dec. 3 at the newly built USB Arena in Elmont, New York, both conferences announced on Friday. The game was originally scheduled for Dec. 2.

As of now, that is the only information available for this particular game. The time of the contest and television information will be announced at a later date.

This meeting between Kansas and St. John’s will be the first college basketball game held at USB Arena. The $1.1 billion multi-purpose venue will open this fall and is located adjacent to the historic Belmont Park racetrack. USB Arena will be the new home to the New York Islanders of the National Hockey League.

Kansas is 1-1 all-time in the Big East-Big 12 Battle. The Jayhawks lost at Villanova, 56-55, in 2019 during the first season of this series. KU earned a 73-72 win over Creighton in Allen Fieldhouse last December.