Since Lance Leipold agreed to take on the renovation project that is the Kansas football program, the team’s newest head coach said he has come to appreciate the excitement his players have for the new staff’s vision, which he hopes will make the Jayhawks consistent winners. Eventually.

“I think there's no simple quick fixes in building a program or in rebuilding a program,” Leipold said during Big 12 media days, when asked what it would take to get KU football back on the map.

Now that he’s at KU, Leipold wants to continue to utilize the type of steady approach that worked for him at Buffalo. He said the KU staff will be consistent in its recruiting methods, starting locally and then spreading out much farther, within the Big 12’s footprint.

From a player development standpoint, Leipold said the coaches’ expectations will be “very similar” to the standards that were in place at both Buffalo and Division III Wisconsin-Whitewater. During Leipold’s eight years as Whitewater’s head coach, the program was a powerhouse, going 109-6 and winning six national championships.

“We're going to expect and want our players to continue to work on daily improvement,” Leipold said. “We have to be a program that's going to take care of the finer points of the game and continue to build consistency and confidence in each and every thing that we do.”

KU last posted a winning record for a season in 2008. In the 11 years since the Mark Mangino era ended in 2009, the Jayhawks never have won more than three games in a season.

Few outside the program expect instant changes this year, despite Leipold’s résumé. KU was picked unanimously in the Big 12’s preseason media poll to finish last in the 10-team conference. What’s more, the Jayhawks’ 12-game schedule is expected to be one of the most difficult in all of college football in 2021.

Neither Leipold nor the program’s two representatives for last week’s Big 12 media days, Kwamie Lassiter II and Kenny Logan Jr., spoke of specific win total goals of bowl berths on the horizon a year after the team went 0-9 in Les Miles’ second and final season in charge. Rather, the players spoke highly of the early signs they see within the program’s walls, which they view as proof Leipold and his staff are rebooting the culture. 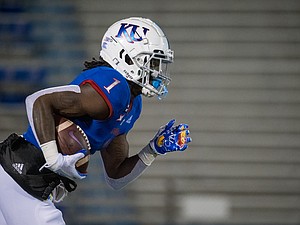 As the Jayhawks have trained this summer with Matt Gildersleeve, the program’s director of sports performance, super-senior receiver Lassiter said the new staff has brought “nothing but energy” through the early stages of the transition.

“I feel like that helped a lot of players buy in,” Lassiter added, “because they saw what direction we were headed.”

Logan, a junior safety, agreed, and views the team’s post-weight lifting environments this summer as proof of a different culture being established.

“Guys are bonding together. We’re all hanging out and in there laughing, singing, just having fun,” Logan said.

With music blaring in the background as a backdrop to those moments, Logan said he can tell the players are enjoying the process.

“We turn up to anything,” he said, when asked if a particular track usually played after a workout session.

The Jayhawks still have to get through the preseason in August — Leipold’s first opportunity to actually coach the team in practices — before the staff will have a better idea of what type of team KU will put on the field in the fall.

Logan said the players will need to help Leipold and his staff build the program up the right way, and “believe in the process and the plan that they’re laying out for us.”

In that sense, Lassiter said how many games KU actually wins ultimately is up to how the players respond to their new head coach and his assistants. The veteran receiver said the Jayhawks talk about winning “every day,” and continue to follow their “1%” mantra from spring football, which focuses on making small gains each day of the offseason.

Any news of a JC LB joining the team?

Great story about why Ianello might be the most important hire.

There was discussion along these lines in the past: Beaty without even the budget to give his assistants reasonable salaries. Long saying he was going to provide every resource possible to Beaty to be successful, but not providing the resources until hiring his guy. Miles getting the additional staff beyond the standard assistant coach allotment.

Ianello might ultimately be the hire that changes the trajectory of the team though HCLL ultimately is the leader, and Goff with the wisdom to see it happen. Sorta like the OL of the administration.

Not only are there no quick fixes, there are no fixes at all. Turner Gill, Charlie Weis, David Beaty, Les Miles, Lew Perkins, Sheahon Zenger, and Jeff Long have run this program so deep into the ground that there is no fixing Kansas football; it is broken beyond repair. 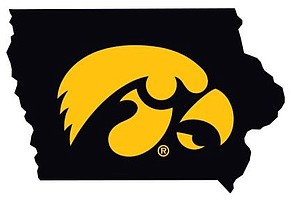 No program, even KU football, is beyond repair. It's not going to happen overnight, but it will happen with continued effort from all aspects of the program. It starts at the top with coaches who are committed to doing things the right way. No shortcuts. The current players on the roster need to buy in and work to get better day in and day out. Recruiting will be key. We need to get our hands on homegrown talent in addition to finding those fringe players who larger schools overlook. Glen Mason did it, Mangino did it. So can Coach Leipold. Although, I do believe he'll have more of a challenge than Mason or Mangino. Hopefully with the full support of the university Coach Leipold and the team will be able to overcome the numerous obstacles that stand in the way of KU football becoming relevant. I have high hopes for KU football going forward. Maybe I'm an optimist, but I for one am not ready to give up on KU football.

What’s the name of the cartoon character shown whizzing on?

Is that what it means?

In the 1960s I thought K-State’s football program was beyond repair.

Oh, I don't know. After the last decade 5 years seems like a quick fix to me.