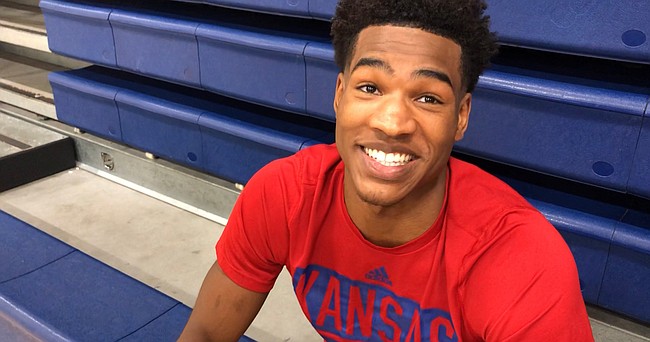 KU senior Ochai Agbaji talked with reporters on Tuesday, July 13, 2021, during a break in a Washburn Basketball camp at Eudora High about his decision to return to KU for another season and what he expects from the 2021-22 Jayhawks.

Eudora — Kansas guard Ochai Agbaji said he knew he was going to come back to school “a couple of days after the combine,” and that the final decision came down to him feeling comfortable with his next move.

“(It was) really just me and the mirror,” Agbaji said Tuesday during a break in Washburn Basketball’s satellite camp at Eudora High. “There’s a lot of outside voices, different people telling you different things, (but) at the end of the day I really just had to look in the mirror and know what I wanted to do and know what’s best for me.”

That, as Agbaji told the world on July 6, was to come back to KU for his senior season. And the reason behind his decision turned out to be pretty simple.

After enjoying a large role as a starter during his first three seasons at KU, Agbaji experienced enough good moments to understand what playing at the highest level at Kansas can do.

“Just having that taste, I want more of that,” he said Tuesday. 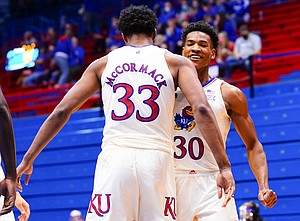 Agbaji did not leave his definition of what “more of that” means to anyone’s imagination.

“Win,” he said. “Win at all costs. Everything (from) Big 12 championship, Big 12 tournament championship, Final Four, national championship, the highest expectations, the high standards that we always have, I think nothing less than that.

“I really just (want) to get the most out of this, as in rings, championships, stuff like that.”

Although Agbaji said he enjoyed the experience of testing his NBA draft stock, his words and his demeanor on Tuesday provided the appearance of a player who was more than happy to be back at Kansas.

He said his brief encounter with pro basketball opened his eyes to a couple of important aspects of the game beyond college. For one, he learned that life in the NBA is about much more than one’s physical performance. And, two, he said the business side of being a professional basketball player was made abundantly clear to him this offseason.

During his days preparing to put his best foot forward in the draft, Agbaji worked out for three NBA teams — Atlanta, New Orleans and Toronto — and said the experience of wearing the gear and going through testing, interviews and team workouts was a lot of fun.

“It was really cool,” he said. “A really good experience.”

Monday was Agbaji’s first official day back on the practice court with the Jayhawks, and he said getting to run around with KU’s newcomers while seeing some familiar faces made him feel right at home.

“I made the right decision,” he said. “It's been really good to be back.”

Although the feedback he gathered during his NBA testing helped him reach his decision, Agbaji said he did not plan to focus on improving anything in particular during his senior season at Kansas.

He said he wants to keep his body in top shape so that he can make winning plays late in games with more regularity — a key shot, avoiding a turnover, a big defensive stand — and he also is looking forward to being more of a leader on a team that he classified as “a veteran team in a way,” even with so many new faces.

“I'm ready for it,” he said of being a leader. “I know they’re going to listen to me, and I know they're going to build confidence in me while I give them confidence, too.”

While some draft analysts speculated that Agbaji’s return to Kansas could help him move his way into first-round consideration in 2022, the Kansas City, Mo., native said his entire focus was on what he could do to help Kansas be successful and nothing else.

“You hear different things every year,” he said. “But you really just got to focus on winning games, because, at the end of the day, that success for everybody else is success for me, too.”

Great to have Ochai back! I think last year he made alot of progress as far as being more aggressive throughout the game. In earlier years he could disappear at times, which for a young player is understandable. But now, its showtime and we need him to go 100% every minute he is in the game. I know he will be our leading scorer. Go Ochai!!

"He did not plan to focus on improving anything in particular during his senior season" seems a little strange. Something in his skill set needs polishing. Doesn't he have to at least assert himself more to stand out from the crowd? Thought I read that on here recently. :)

“ a key shot, avoiding a turnover, a big defensive stand”

This is a comment from a well coached player. Just missing “rebound”.

It’s also good to see that he realizes the plays and his or anyone’s ability to make them is different late in a game vs when you are fresh. It’s the difference between practicing FTs and practicing after running suicides or slides.

Hopefully the new guys also get with the program so that they can be trusted with more playing time and keep everyone fresher for late game situations.

in HS my would often have us run suicides at the end of practice and then call one player up to shoot a free throw. If he made it practice was over, and if he missed it we'd do it again. To me that was always fun, because I was always in good condition and enjoyed cheering for the guy who made it or giving a ribbing to the guys who missed. During Christmas break when we would practice after practice was over he'd have us each make a certain number of free throws before we could leave and if we missed X number in a row we had to run between shots. Usually I would have to make 20 or more and couldn't miss three in a row. But a few times he would say to make 10 but had to run after each miss, and it was always harder to make those 10 than to make probably 50 without missing 2 in a row or 3 in a row.

Matt - Any word on Remy’s arrival? It would seem important that he get dialed in to the rest of the team though my guess is Ochai will take the lead in welcoming him. Completely agree with your comment previously about them having shared and complimentary leadership roles. Really excited for the season.

JCL? Everyone else is back on campus?

Funny you mention that. Ochai said yesterday that he and Remy will be roommates, but there has not been any official word on when he'll arrive. I'd imagine sometime in the next week or so, so he can spend a week or so with his new team, head back home for a break in early August before school starts and then return for the long haul in mid-August.

Just my best guess, but it's probably pretty close to that timeline.

Thanks Matt. That’s great to hear. I imagine the coaches give a lot more consideration to roommates than we do. In a normal year, it would seem important but just magnified this year with so many new players and so much potential. It is not uncommon to hear championship teams comment on the significance of the team chemistry. IMO the psychological part of the game is one of Coach Self’s strong points.

Seems like a good idea to have the two of them as roommates. Force them as much as possible to be best friends. Let them challenge each other and hopefully each of their best qualities will rub off on the other. I could see Ochai dragging Remy to the gym for workouts or shooting practice or Remy pushing Ochai's competitve drive to another level with video games, horse, one on one, or whatever.

“Win,” he said. “Win at all costs. Everything (from) Big 12 championship, Big 12 tournament championship, Final Four, national championship, the highest expectations, the high standards that we always have, I think nothing less than that."

Get the rest of the red and blue crew thinking this way and it could be a very special season with all those things achieved.

Glad to have you back Och!