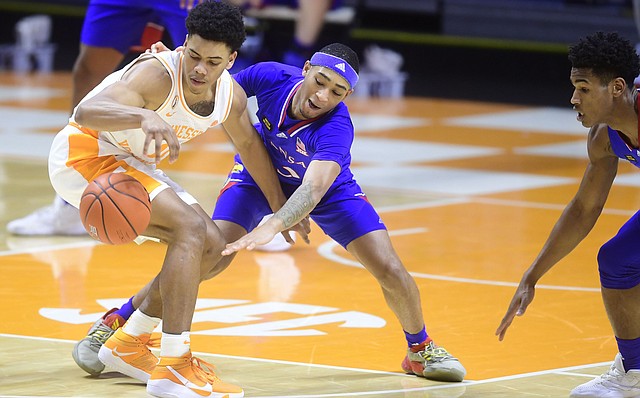 Kansas guard Dajuan Harris Jr. (3) defends against Tennessee guard Jaden Springer (11) during a basketball game between the Tennessee Volunteers and the Kansas Jayhawks at Thompson-Boling Arena in Knoxville, Tennessee on Saturday, January 30, 2021.

Kansas basketball coach Bill Self made a change to the Jayhawks’ starting lineup for Saturday’s 80-61 loss at Tennessee, plugging in point guard Dajuan Harris and sending Jalen Wilson to the bench.

The start was the second of Harris’ KU career, with his first coming at TCU on Jan. 5, when senior Marcus Garrett was out with an injury.

Throughout the few weeks since then, Self has said he thought Harris needed to play more minutes, both to bring better rhythm to the Kansas offense and to give senior point guard Garrett a little help.

“Just trying something new,” Self said after the loss. “ think ’Juan’s done pretty well of late, and I thought it may take some pressure off Marcus to have another ball handler out there.”

It did not exactly work out that way, as Harris picked up two fouls in the first 5:23 of the game, forcing Self to go back to Wilson early and play with just one of his point guards for most of the night.

“’Juan is a much better player when you're playing from ahead than behind,” Self said.

That showed on the final stat sheet. Two nights after making a major impact in KU’s win over TCU at home, the redshirt freshman was scoreless in 21 minutes against Tennessee, and he finished with just one assist and one steal as his only other statistics. 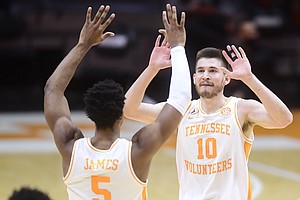 “I don't know that I would rank out his performance very good,” Self said. “Because when he was out there, we didn't play well. That's how you should look at this if you're a point guard and you're not really a scoring (point guard). When you're out there, our team has to be good because that's how you'll be evaluated strictly, not on your individual performance. And we weren't very good out there today.”

Harris wasn’t the only KU reserve to receive an opportunity for more run on Saturday.

For the second game in a row, the Jayhawks also had a new starting five in the second half against the Volunteers.

Self turned to junior college transfer Tyon Grant-Foster to join Harris in the starting lineup for the second half on Saturday. That duo, which gave Kansas a serious spark in Thursday’s home victory over TCU, joined Garrett, Ochai Agbaji and David McCormack in starting the second half.

Like he did against TCU, Grant-Foster was aggressive in attacking the rim off the dribble, but Self said his activity level, offensive rebounding and contributions to team basketball left a little to be desired.

The junior-college transfer finished with three points on 1-of-5 shooting and added two rebounds, an assist and a steal in 14 minutes.

Garrett on an uptick

Although his final numbers did little to impact the final score, Garrett continued his recent stretch of solid offensive games after enduring a mid-season slump of sorts.

Starting with KU’s loss at Baylor on Jan. 18, Garrett’s numbers have improved steadily.

“I don't think anybody played well, other than Marcus,” Self said after Saturday’s setback. “Whether it be Baylor, whether it be TCU whether it be (a couple of other games), Marcus is playing pretty well.”

In his past four games, the KU senior is averaging 13.3 points, six rebounds and four assists per outing. Perhaps more importantly, KU’s lead guard had just one turnover on Saturday, against a Tennessee team that ranks in the top-10 nationally in forcing turnovers. 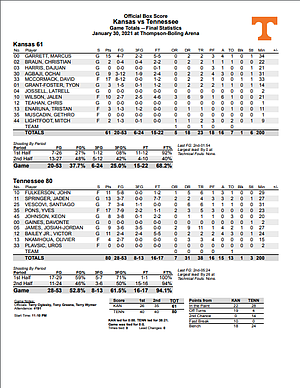 With its five wins in nine games on Saturday, the SEC won the SEC/Big 12 Challenge for just the second time in the nine-year history of the event.

Baylor, Texas Tech, Oklahoma and Oklahoma State were all winners for the Big 12 on Saturday. While Florida, Missouri, Tennessee, Texas A&M and Mississippi came out on top for the SEC.

The 10th game in the series between Kentucky and Texas was cancelled because of COVID-19 protocols.

Saturday’s loss ended an opportunity for the Jayhawks to start a season 12-5 or better for the 15th consecutive season. Instead, KU fell to 11-6, marking their first 11-6 start since the 2005-06 season... KU is now 4-4 this season against ranked opponents... The Jayhawks’ record in the all-time series with the Tennessee fell to 4-2, with Saturday’s loss snapping a three-game winning streak... KU is now 2-4 in true road games this season and 4-5 in games played outside of Allen Fieldhouse... Saturday’s 14-point halftime deficit was the largest of the season. KU trailed Baylor by 13 on Jan. 18... The Jayhawks’ 19-point loss was the second-largest margin of defeat this season, second only to the 25-point home loss to another team in orange, Texas on Jan. 2... Saturday’s attendance was 4,191.