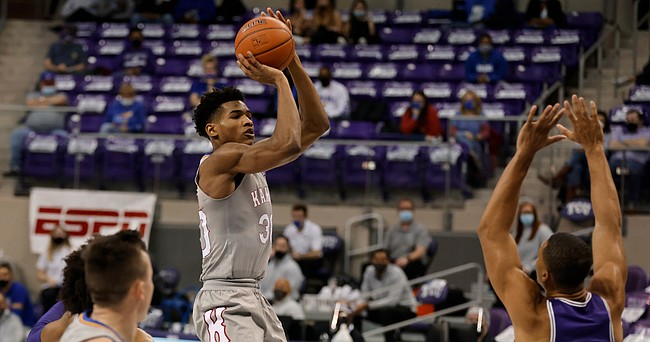 Agbaji’s 30 assists also rank second on his team, trailing only point guard Marcus Garrett, who has 52.

Accoring to hoop-math.com, Agbaji is shooting 59.5% at the rim this season as well as 71.8% at the free throw line.

Agbaji is one of two players from the Big 12 Conference (Baylor’s MaCio Teague) on the Jerry West Award’s top 10, which will be handed out on April 9.

College basketball fans can support their favorite players by participating in the fan voting portion of the award beginning Jan. 29 at www.hoophallawards.com.

Here’s the complete list of the 10 players still in the mix for this year’s honor.

Why not??? The stats in the article speak for themselves. And he's also a good defensive player. Why SHOULDN'T he be on the list?