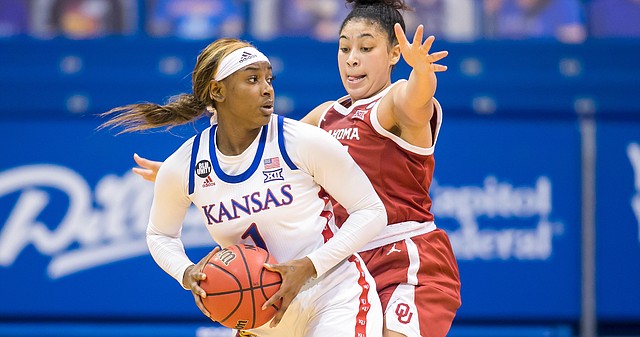 After publishing this preview, KU announced that the next two games for the Kansas women's basketball team have been postponed because of COVID-19. Kansas was slated to host West Virginia on Saturday, and was scheduled to travel to Iowa State on Wednesday.

Due to injury and COVID-19 protocols within the program, the Jayhawks do not meet the roster thresholds set by the Big 12 conference. KU will work with the league to reschedule games, though no dates have been announced yet. This is the second time this season that the Jayhawks have had their schedule altered.

Kansas is now slated to travel to Oklahoma State on Saturday, Jan. 9.

Ready or not, the Kansas women’s basketball team will now turn its attention to conference action when it plays host to West Virginia at 5 p.m. Saturday at Allen Fieldhouse.

Because this year’s schedule is abbreviated, the Jayhawks (5-2, 1-0 Big 12) already have one league contest under their belt. KU bested Oklahoma, 74-64, in the Big 12 opener on Dec. 10 in Lawrence. Kansas then split its next two nonconference games to close out the 2020 portion of the 2020-21 campaign.

It will be all Big 12 play from here on out, however, with Kansas having three league matchups within the next week. This has been an area where the Jayhawks have struggled during the previous five seasons under head coach Brandon Schneider.

Kansas has not won more than four games against league foes in any season under Schneider. In fact, last year’s 4-14 clip in conference play was KU’s best Big 12 record over that span. The Jayhawks won three games in the 2017-18 season, but have not recorded more than two league victories any other year in the Schneider era.

Even with an abbreviated nonconference schedule, though, the Jayhawks believe they are prepared for league play. KU’s only losses so far have come on the road against Ole Miss and a narrow home defeat to North Dakota State without leading scorer Holly Kersgieter.

“We’ve had a little bit of everything,” Kersgieter said of how nonconference action prepared KU. “I think we are excited to have that consistent competition. Everyone we are going to play now is going to be bigger and a little bit faster. We know what to expect more.”

What: Kansas vs. West Virginia

Quick Note: The Jayhawks haven’t really had much of a chance to get in a rhythm as of late. Because two games were canceled or postponed due to COVID-19 protocols, KU has only played two games in the last 20 days. More than that, Kansas has had such little practice time because of all that and winter break entering this weekend.

“My biggest concern (is) with all the lack of practices,” Schneider said. “My biggest concern is players who were in really good shape prior to that, especially from a game conditioning standpoint, it is going to be having to get that back in the heart of conference play.”

"Typically, you are a lot more worried about your legs, rest and recovery than you are trying to get yourself in game shape,” Schneider added.

Streaking: Senior Tina Stephens just missed out on a double-double with 9 points and a season-high 11 rebounds last time out against New Mexico State. Her 11 rebounds marked her ninth double-digit rebound game in her two seasons at KU. Not only that, Stephens paced Kansas in plus-minus with a +29 in her 25 minutes of action.

Slumping: After missing the North Dakota State contest, Kersgieter scored 14 points against NMSU. However, she admitted after the game that she can do better. Kersgieter missed 10 of her 14 shots from the floor, which included four attempts from long range. She had a plus-minus of -4, which was the lowest mark on the team in that game. For the season, Kersgieter is leading the team in scoring with an average of 16.8 points per game.

Ogle returns home: It is somewhat of a homecoming for West Virginia junior Abby Ogle, who transferred to WVU after two seasons at Hutchinson Community College. Ogle was a standout at Baldwin High School, where she led the Bulldogs to a state title in 2018 and averaged 17.4 points per game as a senior. So far this season, Ogle has played in four of the eight games for the Mountaineers.