Kansas forward Mitch Lightfoot (44) celebrates with Kansas guard Ochai Agbaji (30) after drawing a charge against Kansas State during the first half, Monday, Feb. 25, 2019 at Allen Fieldhouse.

Kansas seniors Mitch Lightfoot and Chris Teahan announced Friday that they are planning to take advantage of the NCAA’s waiver for an extra year of eligibility and will return to KU for the 2021-22 season.

In the news release announcing their return, KU revealed that fellow-senior Marcus Garrett would be honored during Saturday’s Senior Night festivities at Allen Fieldhouse surrounding KU’s 7 p.m. game with No. 2 Baylor.

Shortly after the release, Garrett met with the media to discuss Saturday’s game against No. 2 Baylor and the senior leader revealed that him going through Senior Night does not guarnatee that he’s leaving Kansas.

“I haven't ruled it out,” Garrett said of returning for a second senior season. “But it’ll be Senior Night.”

Garrett said he would make a final decision, “after the season when I sit down and talk with coach (Bill Self).” 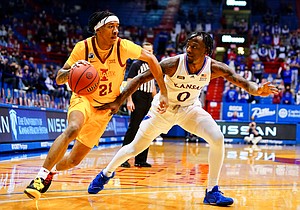 Kansas guard Marcus Garrett (0) follows Iowa State guard Jaden Walker (21) as he heads for the baseline during the first half on Thursday, Feb. 11, 2021 at Allen Fieldhouse.

Self made it clear that he would love to have Garrett back for another season, but he added that their conversations about the topic had been limited and mostly about his plans for Senior Night.

Self did, however, share some of what he talked to Garrett about.

“If this season plays out the way I hope it does for you, you need to try to go. And if it doesn't, you know, you can always come back and I'd love to have you back,” Self recalled telling Garrett. “So that has been the extent of the conversation. It hasn't been anything remotely serious other than the fact that I do hope he plays well from here on out to put him in position where he can make that decision. I don't want that decision to be made for him. I'd rather him make that decision.”

“This year, given all the challenges with COVID-19 and what else has been going on, it was the best interest for myself to come back for a sixth year and get the most out of my time at KU,” Lightfoot said in the release. “One of the words of wisdom coach (Bill) Self had for me was, ‘Everyone is in a hurry to grow up and it should be the other way around. We should stay young and get the most out of it.’ I took that to heart and am looking to do just that.”

Said Self of Lightfoot’s decision to stick around: “I love Mitch Lightfoot. I love him. I would want him around me every day regardless if he was still playing ball or not. I just think he adds energy and adds joy to others lives. Regardless of what his role is, regardless of how many points he scores, regardless of whatever, I know I’ve got a guy out there that's 100% loyal and on my team through whatever we're going through.” 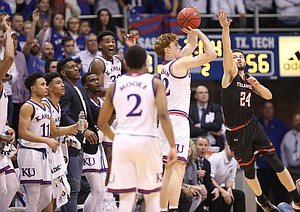 The Kansas bench gets excited as Kansas guard Chris Teahan (12) puts up a three against Texas Tech guard Avery Benson (24) during the second half, Saturday, Feb. 2, 2019 at Allen Fieldhouse.

Self’s thoughts on the return of Teahan, whose family he has now been around for more than 10 years, were equally heartfelt.

“I love having him around,” Self said. “And his ability to put his handprint on our situation, being a walk-on and not playing a lot, I think has been about as good as anybody that we've had in that walk-on type position. I'm very happy he wants to come back, too, and to have a fun senior year. That's what I talked to those guys about.”

The two Kansas veterans and close friends also announced their decision on KU’s social media channels through a video inside Allen Fieldhouse.

After a little dramatic build-up designed to make the viewer believe that they were saying goodbye, the two Jayhawks flipped the script and announced their return.

“Thank you,” they said together before Teahan added, “But we’re not going anywhere.”

“Throughout the year, it didn’t feel right going to the Fieldhouse without 16,300 there,” Teahan added in the release. “That wasn’t the way I wanted my career to end. Coach Self initiated the conversation asking what my plans were for next year and I said I wanted to come back. He agreed that would be a good decision.”

They say all good things must come to an end...

Mitch seems to be trying to make Perry look like a whipper-snapper.

Matt, since Mitch is a scholarship player, will his scholarship next year count against KU’s usual 13 scholarships per year limit? Or is an additional ride for next year because of the situation? Thanks!

According to numerous websites, NO. Technically, if you have five seniors and they all come back, you can have 18 scholarship players for next season.

This is correct. The NCAA has said that there will essentially be no scholarship limit for just next season to accommodate the seniors who want to return for another year... Seems like the fairest way to do it. Programs will have to look a year into the future to make sure they can make it all work with regard to recruiting future classes, but they all have plenty of time to get things in order.

Marcus..no way are you ready for the NBA.

If Europe is OK for you, then go for it. If the NBA is your goal, for God's sake, don't go anywhere.

South Korea is also an option. Marcus can join Dedric Lawson and Cliff Alexander, both currently playing there.

Oh, I think there will be some NCAA scholarship limitations next season....

Isn't Mitch in a position to set some kind of a KU career games played record? I love the guy, but he has not contributed as much nor as often as I would have expected him to do with 5 years+ experience. Finally, he figured out how to set a screen and not get called for a moving one. He's always been a good shot blocker, but his offense, both facing the basket and with his back to the basket has been inconsistent, a word that pretty much defines this teams season.

Mitch may finish with the most credit hours inKU basketball history. That’s not a bad record to have.

Mitch is going for his Masters. If KU keeps him on scholarship, good for him. College isn’t cheap. He knows that he is a role player. I want him to stay, not because he will take us to the promised land, but because he doesn’t hurt us when he’s in there, has his moments when he is on the court, brings unbridled energy that helps the team, but most of all is a really good young man and human being.