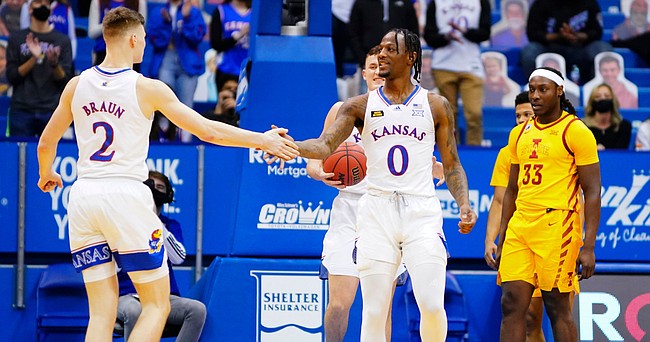 Kansas guard Marcus Garrett (0) and Kansas guard Christian Braun (2) slap hands before Garrett gets sent to the line for a pair of free throws during the first half on Thursday, Feb. 11, 2021 at Allen Fieldhouse.

The Kansas men's basketball season will end up with 27 regular season games after all.

KU on Thursday announced that the 17th-ranked Jayhawks (17-8 overall, 11-6 Big 12) will welcome UTEP to Lawrence next Thursday for the final regular season game of the 2020-21 season.

Tip time is set for 7 p.m. and the game will be shown on an ESPN platform that has yet to be announced. According to a news release from UTEP, the game will be televised by Big 12 Now/ESPN+.

This will mark UTEP's first game against a ranked opponent since 2014. According to the Miners' release, UTEP is also slated to play at Kansas during the 2021-22 season.

The Jayhawks had an opening in their schedule because of the cancellation of the Tarleton State game in mid-December. KU coach Bill Self has said in the past couple of weeks that the decision of whether to add a 27th game came down to risk versus reward.

The risk comes from the fact that the Jayhawks will be bringing to town another team that, like hundreds more, has been navigating playing college basketball in the times of the COVID-19 pandemic.

The reward comes from the fact that KU will get another postseason tune-up and no longer have 11 days between its Big 12 finale against No. 2 Baylor on Saturday and the start of the Big 12 tournament in Kansas City, Mo., on March 10.

“I know coach had been talking to various schools (about) what he wanted to do,” KU assistant coach Norm Roberts said Thursday night while filling in for Self on his “Hawk Talk” radio show. “We (would have been) off for such a long period of time, and coach wants to keep our guys in a decent rhythm going into the Big 12 tournament.”

UTEP is currently 10-10 overall and is tied for fifth place in the Conference USA West standings. The Miners are coached by Rodney Terry who is 35-46 in his third season at UTEP and 161-154 in his 10th season overall.

“UTEP's got a terrific program,” Roberts said. “(And) a great young coach, Terry, who we know. So it'll be a good opportunity for us to play another game.”

The first meeting was an epic, 81-80 double-overtime win for UTEP — then known as Texas Western — in the second round of the 1966 NCAA Tournament in Lubbock, Texas. That Texas Western team went on to win the national title.

This will be the first meeting between the two schools in Lawrence.

Tickets for the UTEP game will go on sale to Williams Education Fund donors on Friday. If tickets remain after the donor pre-sale, the remaining allotment will be donated to first responders.

Student tickets will be available for students who purchased the All-Sports Combo on Friday and, if inventory allows, all other students on Monday.

The Jayhawks will close out the Big 12 Conference season at 7 p.m. Saturday against No. 2 Baylor at Allen Fieldhouse.

Even though there now will be another home game after that, KU officials said Thursday that Senior Night festivities will still take place on Saturday.

Marcus Garrett, Mitch Lightfoot and walk-on Chris Teahan are the three seniors on KU’s current roster. All three could be playing their final home games in the next week. But all three also have the option of returning to KU for the 2021-22 season thanks to a blanket waiver offered by the NCAA in the wake of the pandemic.

Roberts said Thursday night that Self was still having conversations with all three players about their future plans.

I thought it was a double OT game in 66

We must lead the nation in tourney games lost to NCs. So many runners up, plus at least this one and Arizona. Oh how perceptions would change for a basket here and there.

Is there a KU relationship with someone at utep? That’s been a common driver of many games/hires in the past.

I suppose KU Athletics needs extra cash like everyone else... why else would they be in such a rush to add a game? Seems odd to me. Let them rest... or practice! Then again, this team was terrible after the break this winter, so maybe they need to keep playing.

My thought was to let them rest and stay healthy and not injure themselves in a meaningless game right before the postseason gets underway.

Tried that once over the Christmas break. Remember how January went?

I remember when UTEP beat us in the NCAA Tournament in the early 90's. That was no fun. Also, why do so many people hate ESPN+? It is a way to get to see games (not just KU) that you would not get unless you went to a sports bar.

KU games have always been a high priority for networks to carry and there have been various ways for us to watch them that have been created to do so such as ESPN Full Court which was disbanded once they realized they could sell the coverage to the ADs like ours and make more money. The first few games this year experienced technical difficulties with loss of picture, loss of sound, interruptive viewing and more. The fixes seemed to work so now we are just relegated to not being able to record those games, unable to easily go FF or RW, can't go slow mo, can't save them for future viewing and have to depend upon a few being carried for a short time with their ON DEMAND and then lost forever.

That was the game that Terry Brown finally got his shot back and made 5 of 6 treys, but missed the potential game tying or game winning bucket.

I remember that game, I lived in a schol hall at the time. It was like someone dropped a bomb on the building...we were all just dazed, I think I was lying on the couch in a fetal position for 10 minutes or something.

Armen, you now have me confused. The 1992 UTEP-KU upset was 66-60. Terry Brown had already graduated. UTEP slowed the pace down (shot clock yet?).

Both of these were Round 2 NCAA games and upsets against KU. I watched depressed both times in the same Buffalo,NY sports bar.

Yes, Roy Williams had some early round NCAA upsets too.

I was Age 10 in Lawrence 1966, when I watched Jo Jo White swish a game winning shot on TV. The REF who called Jo Jo's foot out of bounds waited to blow his whistle until the shot was in the air. Watching on TV, KU Fans, like me, thought we had won the game until....

And believe it or not, I was Age 11 in Lawrence DEC 1966, for a rematch of the two teams. It was on TV, and played at a neutral site (Chicago?), KU lost 71-67 to Texas Western in that regular season game. UCLA with Lew Alcindor won the 1967 NCAA Title.