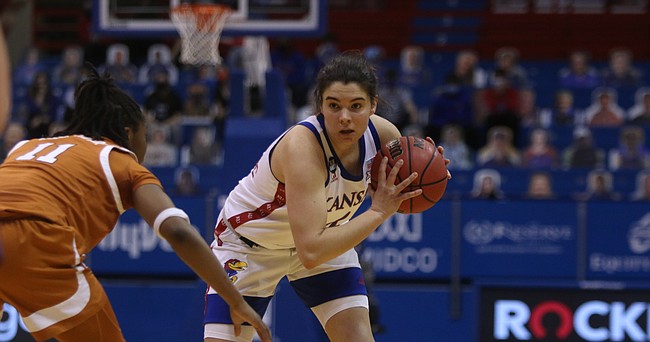 Kansas guard Mia Vuksic looks for an avenue to attack the Texas defense during the Jayhawks home game with the Longhorns on Wednesday, Feb. 24, 2021.

The beginning of each half proved problematic for the Kansas women’s basketball team during a 61-52 home loss to Texas on Wednesday night.

A 17-5 hole to open the game, which turned into a 22-7 deficit before the Jayhawks knew it, doomed set the tone for the night at Allen Fieldhouse.

The loss, KU’s fifth in a row, dropped the Jayhawks to 7-14 overall and 3-12 in the Big 12 and featured UT outscoring KU 34-15 in the first and third quarters combined.

The Jayhawks outscored Texas 37-27 in the second and fourth quarters combined, including 22-14 in the final quarter.

“You just can't play the game dejected. You can't play it frustrated. You have to just continue to fight,” KU coach Brandon Schneider, praising his team’s never-quit mentality.

Schneider said his team played too sped up in the early going, which led to short possessions, a few turnovers and point-blank misses at the rim. 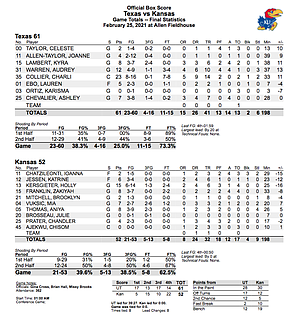 The Jayhawks made many of those shots in the first meeting with Texas in Austin in early January and outscored UT 46-28 in the paint in a seven-point loss down there.

On Wednesday, with different personnel than they had for the first matchup, the Jayhawks scored 16 fewer points in the paint while holding the Longhorns to the same total as before.

“Even when we broke the full-court pressure, we went down and took shots on the first side of the floor, we didn't attack the paint, we didn't even give them an opportunity to foul us,” Schneider lamented. “We just didn't play with the kind of poise and composure in the first quarter that you need against that type of pressure.”

It wasn’t just the full-court pressure that aided the Longhorns’ victory. Throughout the night, the UT defenders also pressured the ball well above the 3-point line and forced the Kansas players to deal with a hand in their faces at almost all spots on the floor.

“Texas (16-6, 10-5) is is a special prep,” Schneider said. “There's just not many teams in the country that deny the ball in on every single entry pass, whether it's after a made basket or dead ball. We just didn't execute versus the pressure, particularly in the half court, as well as we would have liked.”

Wednesday’s loss came on the heels of a 99-98 overtime loss at Texas Tech last weekend, and Schneider said the lingering effects of that hard-fought heartbreaker may have contributed to Wednesday’s setback.

“I don't know that they were all the way moved on from it,” he said. “Obviously, we want to move on from it, but I think how that game turned out and some of the primary reasons it did was extremely frustrating. I think I was probably more dejected and upset and frustrated maybe than even some of the members of our team. So I thought they handled it with real maturity and character.”

After falling behind by as many as 20 (47-27) late in the third quarter, the Jayhawks trimmed the UT lead to 12 points three times late in the fourth and single digits with 49 seconds to play.

But time ran out on the late rally before Kansas could cut into the lead any further.

Holly Kersgieter scored seven of her team-high 15 points in the final frame and played a huge role in KU’s frantic fight in the fourth.

Texas center Charli Collier, whom Schneider said is projected to be the No. 1 pick in this year's WNBA draft, led all scorers with 23 points on 8-of-16 shooting. She also added 14 rebounds and was one of two UT players to record a double-double.

Next up, the Jayhawks will take on No. 18 West Virginia at 1 p.m. on Saturday at Allen Fieldhouse, before closing the season with games at Iowa State and home against No. 7 Baylor.

Asked what he wanted to see from his team in the final three games of the regular season, Schneider pointed to KU’s ultimate goal of qualifying for the postseason — most likely the WNIT in this particular case — as motivation to finish as strong as possible.

“You want to play as well as you possibly can against three opponents that are all going to improve your NET (ranking), because of the strength of schedule, and even tonight, closing and cutting it to nine, impacts your NET rating,” Schneider said. “We we still have a goal of being a postseason team. That’s our objective, and it's still a reality for us.”