No. 23 Kansas sent a big statement by putting together one of its better performances of the season in a 67-61 win over No. 15 Texas Tech Saturday afternoon in Allen Fieldhouse.

Kansas never trailed in the rematch on Saturday, leading from start to finish thanks to a strong effort on both ends of the floor. David McCormak, who Texas Tech coach Chris Beard called the best big man in the league entering this matchup, led the Jayhawks with 17 points on 7-of-10 shooting.

McCormack’s performance helped Kansas post a 24-14 advantage for points in the paint. 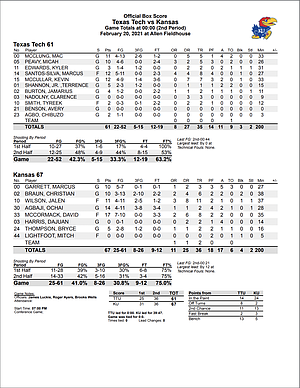 The Red Raiders had four players end up in double figures in the loss, though no player finished with more than 12 points.

While the Jayhawks never trailed, it wasn’t all perfect by any means. After being down by as many as 11 in the final few minutes of the contest, Texas Tech eventually cut it to a one-possession game in the final minute of action.

Kansas guard Christian Braun then buried a 3-pointer with 25 seconds remaining to effectively ice the game, holding off a late charge by Texas Tech.

Kansas will travel to Texas on Tuesday.