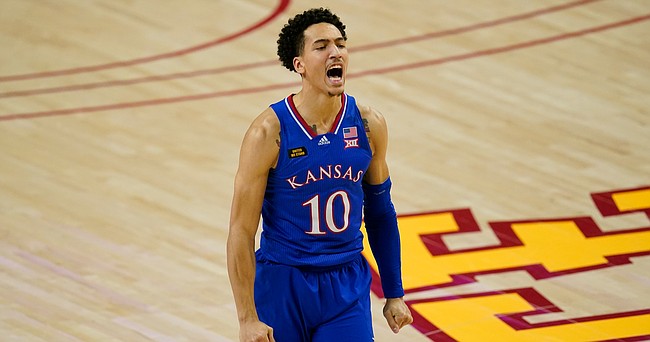 He’s currently riding a streak of four consecutive double-doubles, which is a KU freshman record, and his seven total so far are the third most by a KU freshman in the Bill Self era behind Josh Jackson (13 in 2016-17) and Joel Embiid (8 in 2013-14).

Wilson ranks third on the team in scoring at 12.8 points per game and is KU’s leading rebounder at 7.8 boards per game. That rebounding mark puts him third in the Big 12 and first among all Big 12 freshmen.

Wilson’s becomes the second Jayhawk to earn one of the conference’s weekly honors this season. Sophomore guard Christian Braun was named Big 12 player of the week in late December.

A chance to rest

After playing three games in six days last week, the Jayhawks took Sunday off completely to give their bodies and minds some rest.

Self called the decision to rest early in the week instead of after Wednesday’s game at K-State “the percentage play.” He noted that the Jayhawks will not be able to enjoy any down time later in the week because doing so would limit their time to prepare for No. 15 Texas Tech.

“I think that was probably good for us,” Self said of the off day Sunday. “I’m sure K-State did the same thing, so we should have two fresh teams playing each other on Wednesday.”

Self said the Jayhawks would practice hard Monday and Tuesday before traveling to Manhattan for a 7 p.m. tipoff on Wednesday night at Bramlage Coliseum.