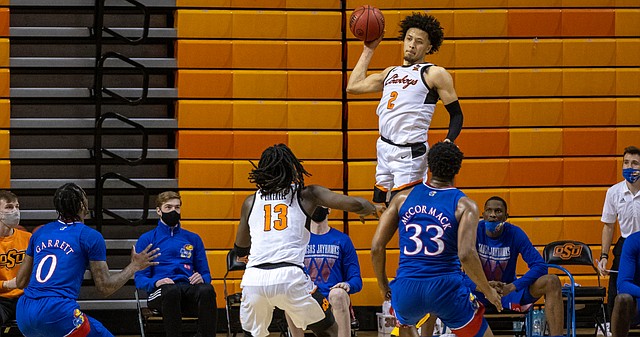 Analytics and numbers and stats and circumstances are all well and good and can be a key part of any matchup across college basketball.

But none of them mean much to this Kansas basketball team right now. Because the only thing that matters to KU is finding a way to get stops.

The Jayhawks have done it in spurts. The way they defended — and played as a whole — to start the second half in their loss to West Virginia on Saturday might have been their best few minutes of basketball of the entire season.

So they know it’s in them. But finding a way to sustain it and repeat it and deliver that kind of effort when it counts the most has been a major challenge. And that’s why there’s nothing more to this one than pure pride.

Sure KU will go over its scouting report on the Cowboys. And it’ll help that the Jayhawks are seeing them for the second time. There will be some familiarity with personnel and tendencies and the way OSU’s guys like to play. So all of the normal prep work will still be there and will be important.

Remember, OSU embarassed KU in the first meeting by racking up 37 points in transition, and the Cowboys often looked like they were sprinting past a flat-footed bunch of Jayhawks to easy buckets at the rim off the break.

That’s been a major emphasis for KU since that game and getting back on D no doubt will be at the top of the list of priorities for Kansas in the rematch.

But when the ball is tossed up for the opening tipoff that will all become secondary and the primary thing that will determine whether KU wins or loses — and they don’t make games much bigger than this one — will be how deep this team can dig to find a way to make it happen.

If they’re up to that challenge, they’ll have a good chance at coming out on top. Remember, until they gave it away in the final 80 seconds in Stillwater a month ago, KU’s comeback to claim the lead late was also one of the better stretches of basketball this team has shown this season.

And KU’s defense played a huge part in that comeback. Stop after stop set up KU’s surge and also sent a rush of confidence through the entire roster.

So maybe the best thing this team can do is open the game with the mentality that they’re down 13 with the season on the line and time running out. Because if they don’t play with that kind of urgency, the Cowboys are very capable of pulling off the rare season sweep of a Bill Self squad.

And if they can do it, there are two teams lurking right around the corner who may be poised to do it as well.

2. Forget about the past

At this point in this rough Kansas basketball season, the only thing the Jayhawks can do is look ahead.

Looking back at what went wrong, where they were and how they fell and what could have gone differently will only go down as wasting time.

The Jayhawks have just one mission the rest of the way and that’s to improve as much as possible in the time they have left to position themselves to make some kind of run when March rolls around.

The way this team has struggled over the past five weeks, that’s much easier said than done. But that has to be the focus.

“We have games coming up, it’s a quick turn-around so we can’t dwell on this one,” KU guard Christian Braun said after Saturday’s loss at West Virginia. “But we can tap into more. We know that. We have plenty of games to go win and I know this team can do it. But we have to take it one game at a time and make sure we don’t slip up.”

Self was already preaching that same approach in the postgame locker room after the loss to West Virginia.

“Oklahoma State’s already beat us once and they are plenty good enough to beat us twice if we don't play,” Self said after Saturday’s game. “And we're gonna have to play well in order to beat them, so we’ve got to let (the WVU loss) go. We’ve got 48 hours to get right, and we’ve got to let it go and have a really good week, which we still have an opportunity to do.”

Kansas sophomore Christian Braun turned it over twice, fouled out, made just three of 11 shots and hoisted a couple of airballs during Saturday’s loss to West Virginia.

But none of that carried as much weight as the effort he put forth throughout the loss. Braun sacrificed his body on a number of occasions, diving after loose balls on the floor or selling out for steals.

And it’s that kind of effort, from start to finish and from all five guys on the floor, that the Jayhawks need to embrace to try to get things back on track.

Since his first week on campus during the summer of his freshman season, Braun has impressed his teammates and coaches by playing with reckless abandon and finding a way to make plays and save possessions out of nowhere.

As his role has increased, Braun has shown a tendency to let things like off shooting nights or rough games take some of that edge away from him, and the sophomore clearly is aiming to get back to being him with the Jayhawks reeling and looking for all of the positive momentum they can get.

“That’s just what I have done, that’s something that I’ve prided myself on since I started playing basketball and I have always been someone who makes hustle plays,” Braun said. “That’s something I want to do more of and hopefully the team follows. Those hustle plays can really turn our season around and spark some energy. It gives us energy and makes us play harder. That’s what we have to do to turn it around right now.”

KU's coaching staff won’t have to talk too much to the Jayhawks about just how talented OSU’s star freshman is. They saw it firsthand in Stillwater, Okla., about a month ago.

One of the more impressive parts about Cunningham’s showing against KU in that OSU victory — and, really, about his entire freshman season to date — was how effortless it was for Cunningham to put up numbers.

He’s not a ball hog or a chucker, and he’s just as happy to play team basketball as he is to take over and beat teams with his individual talent.

That’s what makes him so tough to guard and stop.

“I thought he showed everybody why he's so good,” Self said after KU’s loss to OSU in the first meeting. “Because he did it a plethora of ways. It wasn't just catching and shooting. He did it by playing, and I thought he was very impressive.”

Cunningham enters this one averaging 18.2 points, 6.3 rebounds and 3.6 assists per game, and those numbers illustrate the many ways Cunningham can beat you.

That’s to say nothing about his size (6-foot-8, 220 pounds), defensive ability and instincts that also were on display in OSU’s win over Kansas, when Cunningham went for 18 points, 7 rebounds and 3 assists against the Jayhawks on Jan. 12.

Several Jayhawks took turns guarding Cunningham in the first meeting and most of them came away with a tough bucket to talk about. Whether that was by design or in switches, Oklahoma State’s ability to get Cunningham in matchups that favor his game makes him a tough man to guard.

His ball handling ability is elite. His jumper is smooth. And his size and length allow him to attack the rim off the bounce or get easy buckets in transition off of his defense.

KU did a better job of taking Cunningham away in the second half in the first meeting, but a big part of the reason for that was the zone defense the Jayhawks turned to.

Self’s not likely to go into this one — or any game — wanting to play zone, so most of the task of checking Cunningham likely will fall on Marcus Garrett and Ochai Agbaji.

If they can combine to slow him down and take him out of what he wants to do — even if he still puts up numbers — it will go a long way toward increasing KU’s chances of winning this game.

If the Jayhawks have any hope of making some type of run late in the season that puts a different spin on what has turned out to be a rough 2020-21 season, this game is absolutely crucial.

So if KU hopes to go into its three-game stretch to finish the season against Texas Tech, Texas and Baylor with any hope of being in those games and of getting right before the tournament arrives, the Jayhawks need to get this one to prove to themselves that they can still beat good teams.

TCU is decent. K-State isn’t. And those are the Jayhawks’ only wins since Jan. 10. So not only would getting this one help KU’s psyche in the here and now, it also would go a long way toward helping the Jayhawks move forward with a little bit of confidence and perhaps even a dose of that Kansas swagger.

These guys have not quit on the season. Their coaches still believe in them. The players believe in themselves. And the feeling around the program is still that Kansas has enough talent, if it plays smart, strong and mentally tough, to compete with anybody in the country.

That’s the kind of mindset a team needs when things go south. But you can only suffer so many setbacks and rough outings before you starting questioning those beliefs yourself.

Winning cures all. It always has and it always will. So finding a way to get a win tonight, against a good team that already beat you once, could do wonders for the Jayhawks and be worth way more than a single win in the win column.

KU leads the all-time series with Oklahoma State 118-60, but the Cowboys have been one of the few teams to have KU’s number in recent years. No team has defeated Kansas more than OSU since Self got to town. And Oklahoma State is 5-8 against KU in the last 13 meetings while also owning the only regular season sweep of Kansas in the Self era.

Even though oddsmakers in Las Vegas were up to their ears in Super Bowl bets on Sunday, the line came out as Kansas -4 early Sunday afternoon.

The Jayhawks are 8-1 inside Allen Fieldhouse this season and 4-6 in games played away from their home venue.

The Cowboys, meanwhile are 6-2 in true road games this season, including a 3-2 mark in Big 12 play, with the wins coming at Texas Tech, Kansas State and Iowa State.