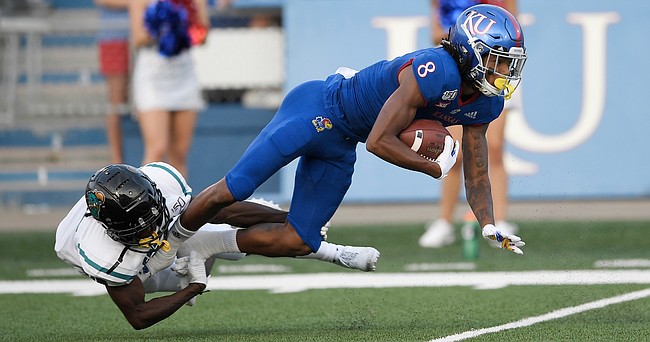 “There’s going to be a key group of leaders,” Miles said of having the veterans returning for the 2021 season.

While KU lost two of its most talented receivers, Andrew Parchment and Stephon Robinson Jr, to the transfer portal, the offense will be able to bring back Lassiter, the former KU walk-on who ended up leading the team in receiving in 2020.

During the Jayhawks’ 0-9 season, Lassiter started eight games, played in all nine and finished with team-highs in catches (43) and receiving yards (458). Lassiter tied Parchment, who transferred to Florida State, and Luke Grimm for the team lead in touchdown catches, as each made two. 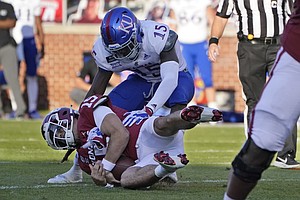 Clark, a 6-foot-3, 323-pound offensive lineman from New Orleans, was one of only three KU players to start every game in 2020. Clark opened the year at left tackle, replacing Hakeem Adeniji. But after Miles fired O-line coach Luke Meadows, Clark finished the season starting at left guard, the spot he manned the previous season, before Adeniji graduated and was drafted by the Cincinnati Bengals.

Hughes, a 6-4, 318-pound O-lineman, started the first six games up front for KU before suffering a season-ending foot injury.

A speedy, 6-1, 223-pound outside linebacker, Johnson was the only Jayhawk to share with reporters during this past season his plans to stick with the struggling program.

“Knowing my circumstances, it’s really just another person just to lead and really more along the lines of not doing it for my own well being, but for the others,” Johnson said this past November. “To put KU on the map basically. We’re not on the map. And people know that. It’s good to say that — it’s OK.”

Johnson, who started eight games and played in all nine, ended up second on the team in total tackles, with 42.

That’s the same number Thomas, a 5-10, 180-pound safety, made in his eight starts. Thomas also was credited with four pass breakups.

Betts, a 6-1, 204-pound safety, ended up playing a larger role for the secondary as the season progressed. In what proved to be the season finale at Texas Tech, Betts made six tackles, forced a fumble and returned a fumble 45 yards. Betts had 25 total stops on the year and started six games.

Burt, another former walk-on, started seven games and played in nine, finishing with 15 total tackles in the middle of KU’s defensive line. He announced shortly after the 2020 season he would come back for a bonus year.

This coming season will mark the sixth year in the program for Lassiter, Hughes and Clark, all of whom redshirted earlier in their careers. It will be the fifth year at KU for Johnson and Burt. Lopeti, Thomas and Betts, all of whom transferred into the program, will be in their fourth year with the Jayhawks.

The NCAA determined back in August of 2020, before fall sports began, that all Division I athletes would receive an extra year of eligibility, due to the complications surrounding the COVID-19 pandemic. Athletes who are able to take advantage of this unusual extra season of eligibility won’t count against their team’s scholarship limits this year.

However, no senior who takes advantage of the waiver is guaranteed financial aid or a scholarship. Such decisions are up to each athletic department.

KU seniors from 2020 who entered the transfer portal

It will be good to have Malik at LG instead of struggling completely out of position at LT. Grunhard should be a nice solid core, and hopefully the young have grown from being thrown in the fire last year.

Nice to have Kwamie and Grimm outside but fully expecting them to be support for Davis basically from day 1.

Thank you. All Jayhawks fans should appreciate the loyalty of these seniors who are willing to come back for another season and contribute to the rebuilding process. Rock Chalk.

Can't wait to see Grimm play on a field with an OL that will allow the QB to find him. Kid runs great patterns and is both quick and fast enough to match his toughness. Should have a very solid career with KU. I see Gray as being a kind of athlete learning to play his position his first year. Should make some exciting plays but will learn to play his position in his second year.

Jim - Are you referring to Kameron Grays? The recruit that followed Dearmon to MTSU. There’s another WR that got away; went to Michigan State IIRC.