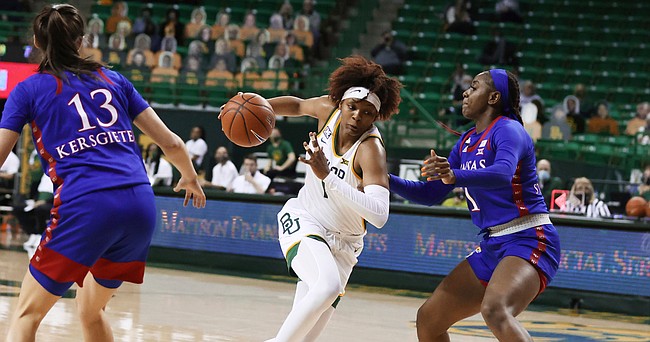 Baylor forward NaLyssa Smith recorded a double-double of 17 points and 10 rebounds, two of her teammates finished a single point and rebound away from joining her and eighth-ranked Baylor rolled over Kansas 83-50 on Thursday night in Waco, Texas.

The loss dropped Kansas to 6-9 overall and 2-7 in Big 12 play and pushed KU’s losing streak to four games. It also was the second consecutive game where KU’s offense could not get out of the 50s while its defense allowed 80-plus.

After an eight-point first quarter, Kansas actually crawled back into the game by winning the second quarter 20-17 and trailed by just 10 at halftime, 38-28. 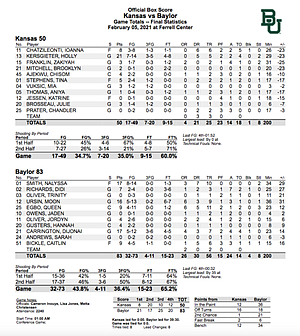 Sophomore guard Holly Kersgieter scored 14 of her game-high 21 points in the first half, knocking in five of 10 shots from the floor and two of three from 3-point range.

However, just one of her teammates (freshman Ioanna Chatzileonti, 8 points and 6 rebounds) scored more than five points and the Jayhawks turned it over 18 times while shooting 35% from the floor.

BU put the game away with a 25-10 advantage in the third quarter, turning a 10-point halftime lead into a 25-point cushion heading into the final quarter.

The win was the fifth straight for Baylor since falling at home to Iowa State on Jan. 16. That loss came three days after the first meeting between Kansas and Baylor was postponed because of COVID-19 protocol issues.

No makeup date has been set for the second Kansas-Baylor matchup of the season.

KU will look to snap its four-game losing streak this weekend when TCU (7-8, 2-8) comes to town for a 1:30 p.m. Sunday tipoff at Allen Fieldhouse.

Keep working ladies, we're behind you.