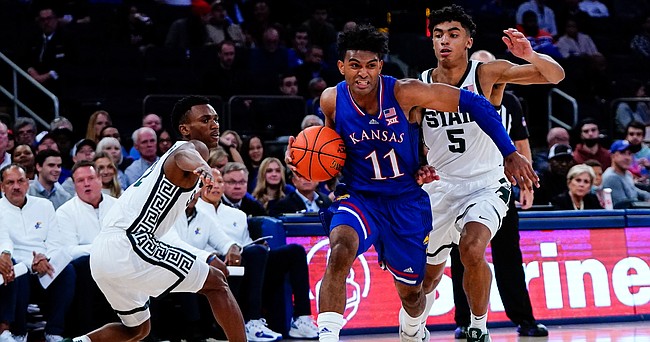 Kansas coach Bill Self has talked plenty so far this season about his team’s issues on defense. Fixing them has become a top priority.

Whether they’re surrendering 83 points to Iona, giving up too many easy shots to all of their opponents or not sustaining defensive intensity throughout each game, the Jayhawks continue to find themselves in search of more consistent defensive performances.

With so many new faces trying to figure out what Self demands on defense, the Jayhawks are very much a work in progress. But some of KU’s veterans believe they know what it will take to become more consistent and effective in guarding their opponents.

For starters, it’s pride. Self has said on more than one occasion that he thought his team’s defense had been “very good” in the first 10 minutes of games. But midway through the first half, something happens that causes the Jayhawks to pull back on their intensity.

“Any game that we go out there and step on the floor, we’ve got to be as turned up as possible,” senior forward Mitch Lightfoot said. “Each game, you have to treat it the same and you have to bring the same attitude. You can’t differentiate how turned up you can be.”

One of Self’s top goals for all of his defenses is to make opponents play bad so the Kansas offense doesn’t have to be perfect. So far this season, however, it’s mostly been the KU offense that has carried the water.

“That’s the one constant that should travel with each and every game,” Self said of stout defense. “And, right now, it’s not.”

He pinpointed a few areas that needed work.

With starting point guard Dajuan Harris Jr. being limited offensively, Self said he’d like to see the third-year sophomore “be great” on the defensive end.

He continues to ask senior transfer Remy Martin to stay sound and work hard on defense, and pointed to Martin flopping to try to draw a charge during one possession against Iona as an example of how the KU newcomer could lock in better.

“You just don’t do those things,” Self said.

And then there are the big guys. Part of senior forward David McCormack’s early-season slump has been his inability to play to his size on the defensive end as a shot blocking threat and rebounder. Self continues to say that McCormack needs to be a “presence.”

“Those are things that are correctable, but we’re just not doing them consistently,” he said. “There’s a lot of things we can do better.”

St. John’s coach Mike Anderson and his brand of basketball is not anything the Jayhawks haven’t seen before.

Now in his third season with the Red Storm, Anderson’s teams faced Kansas for five consecutive seasons when he was the head coach at Missouri from 2006-11, and even once while he was at UAB before that.

While Self and company always fared well against Anderson — KU was 9-1 against MU while Anderson was there — Self said Anderson’s in-your-face, pressing style of basketball always presented a challenge.

The tough thing about Anderson’s style of pressure is that it’s multi-faceted and forces opponents to handle more than one look.

The key to having success against it, Self said, is continuity.

“For a team that has to look at them and say, ‘OK, they’re in this defense, so we need to back it out and run this offense,’ they’ll have great success if people attack them that way,” he said. “So we have to find a way to attack them where we just flow into it, and no matter what they’re in we don’t think and just play.”

3. Figure out the bench

Six games into the season, Self is still searching for the right combinations of players to use at particular moments.

The Jayhawks have started the same five players in all six games, but the patterns Self has used for his reserves has been sporadic and different each game.

Part of the issue there is his desire to give regular minutes to more players than normal.

“Twelve guys deserve to play,” Self said this week on his Hawk Talk radio show “But we should only play nine.”

Figuring out who those nine should be is the challenge and it likely will remain part of the puzzle for at least a few more weeks. Self seems to be getting closer to cracking the code, though, and it has everything to do with making sure that at least two are three starters are on the floor with the KU reserves at all times.

“You take two out, they play six, seven minutes; you take one out, another one out, the next thing you know you have four reserves in the game and the (opponent) goes on 8-2 run and we lose our momentum,” Self said of the pattern plaguing the Jayhawks. “The reserves (have) played very well in stretches. As a group, collectively, I don’t think our bench (has been) as good as far as keeping or increasing leads.”

Self said a lot of the blame for that falls on the coaches, not the players themselves.

“That’s on me,” he said. “Because we were playing four or five subs or reserves at a time. It needs to be two or three max. I’ll figure it out. I really believe that’s on me more than the players.”

Self said on Hawk Talk that reserve guards Jalen Coleman-Lands and Joe Yesufu could be in line to play more minutes, therein allowing them to find better rhythm and become more productive.

“I do think for us to be really good, those guys need to probably play more and give us more production off the bench,” he said.

Freshmen KJ Adams, Zach Clemence and Bobby Pettiford all have played significant minutes and very few minutes, depending on the matchups. And the Jayhawks are still content to work Lightfoot and 2020-21 starter Jalen Wilson into the rotation, as well.

“It’s hard to look good if you don’t play substantial minutes,” Self said. “But you want to give everybody a chance to play. (It will) be a problem if we don’t figure it out by February. I think we will.”

Regardless of who’s playing and who isn’t, Lightfoot said KU’s reserves need to have the same mindset.

“It’s still early in the season and coach is still trying to figure out which combos work, which players work with other players,” he said. “But when we get out there, the lead has to grow instead of diminish.”

Back in school after testing the NBA draft waters a season ago, Champagnie is off to a stellar start for the Red Storm, averaging 21 points and seven rebounds per night over the first six games.

A 6-foot-8, 215-pound junior from Brooklyn, Champagnie has the kind of size to do damage in the post and the shooting stroke to catch fire on the wing.

“He’s a pro,” Self said Wednesday while previewing the matchup. “I mean, he can play in the (NBA).”

Because of that, the Jayhawks will have to get creative on how they guard him. Self said it’s not as simple as simply putting one Jayhawk on him and telling him to lock him down. Even in the days of defensive standout Marcus Garrett, that likely would not have happened given how often KU switches while defending in the halfcourt.

Still, it’s clear that Champagnie has the Jayhawks’ attention.

“We’ll definitely have a game plan on how to match up with him,” Self said. “We probably need to throw some different looks at him.”

Ochai Agbaji, Jalen Wilson and even Christian Braun figure to find themselves matched up with him most often. But in the event that he catches smaller Jayhawks Dajuan Harris Jr., Remy Martin or Joe Yesufu on him, the Jayhawks have a plan for that.

“We’re going to have to help them in the post a lot,” Self said.

A first-team all-Big East performer last season, Champagnie also was the co-winner of the Big East’s Most Improved Player Award a season ago, as he led the conference in scoring (19.8 ppg) and free throw percentage (88.7%) and was fifth in 3-pointers per game (2.4), seventh in rebounds per game (7.4), fourth in steals per game (1.4) and ninth in blocks per game (1).

Back in New York for the second time this season, the Jayhawks will face a talented, tough and athletic St. John’s squad in the 2021 Big East-Big 12 Challenge.

The two schools will be playing the first basketball game in the history of recently opened UBS Arena, the brand new home of the NHL’s New York Islanders.

As a result, Self said he expects there to be an added level of flash and flare to the game, even if it’s not the most notable regular season matchup on KU’s schedule.

Already 1-0 in NYC this season, the Jayhawks have fared well in New York in recent years, winning games in the Champions Classic and at the Preseason NIT at Barclays Center in Brooklyn in 2018.

Self and company know, though, that this game, particularly in a potentially charged up atmosphere, will be every bit as challenging as anything they’ve seen so far this season.

KenPom.com lists Kansas as an eight-point favorite, with a 78% chance of winning the game.

On the defensive side of the ball, St. John’s is in the top 50 in turnover percentage, 2-point percentage defense, free throw defense, block percentage and steal percentage.

“They’ve got a good team,” Self said. “They’re off to a good start, and the one loss they had was to Indiana and that was a two-point loss or they’d be undefeated right now. It’ll be a hard game.”

Isn’t that really how bad are your opponents?

Sagrin says their SOS is 355! There are only 358 teams in the CBB rankings.

I had forgotten that Mike Anderson, of all people, was head coach at St. John's. It would give me great satisfaction if we could lay one more beatdown on the former Misuse coach again. But we'd better play 40 minutes of defense and develop a killer instinct if we want to be worth anything this season.

On another note, how about Mark Turgeon getting broken off from Maryland, and Danny Manning being promoted to interim coach?

I've hated Maryland ever since they beat us in the Final Four twenty years ago, and I've never liked the idea of KU alumni leading the Maryland program. I'll be interested to see what happens to Turgeon and Manning in the months to come.

You took me to dark place for a moment mentioning that Maryland game. :)

Sorry Rodney, not my intention. For what it's worth, memories of that loss to UM take me to a dark place too.

Matt--Will you be publishing your take on Mark Turgeon's run and departure at Maryland? I will always cheer for a KU alum as the coaching tree grows, with only a few (or one) destination off-limits (but that would never happen anyway). Is Maryland basketball like Texas football concerning their expectations, or is something else going on?

Do not like where we are as a team right now. We are not set on the rotation, defense is iffy, and our play away from home has not been sharp. DM and JW are a hinder.

If we come out flat its going to be a long night.

Manning is interm only, they want results and his resume at WF is not what they are looking for.