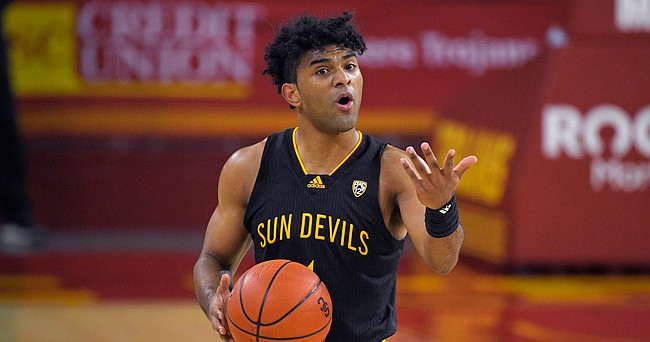 There may still be a long way to go until Kansas transfer Remy Martin fully has a grasp of what his role will be with the Jayhawks during the upcoming season.

But, after spending a little over two weeks around him — including the end of summer workouts and the first full week of preseason practices — KU coach Bill Self has discovered one thing he really likes about his new point guard.

“He’s thinking right, right now,” Self said Monday before teeing off at the Bill Self Golf Classic to benefit the Boy Scouts of America. “But he can also play to his talent a little bit more and his ability to score.”

The Jayhawks still have a month before official practices begin. And, from there, they have another five weeks before their first official game. So there’s plenty of time for Martin to gel with his new teammates and gain a better and more complete understanding of what playing point guard at Kansas requires.

Truth be told, it’s different things for different players. And that’s been true even just in the Self era.

Some, like Aaron Miles and Russell Robinson, were true point guards who sought out ways to set up their teammates and make sure the offense ran smoothly before anything else.

Others, like Sherron Collins and Frank Mason, as upperclassmen, shouldered the load offensively as 20-points-per-game scorers and the top option on their respective teams.

And then there were the Devonte’ Graham and Devon Dotson types, who were good enough to score at will but also had enough help around them to play the role of table setter at any given moment.

Martin comes to KU with the skills to fill either role, but needs the time to figure out which one best suits this particular Kansas team and his 17 new teammates.

So far, Self has liked what he’s seen in terms of Martin’s effort toward figuring that out.

As for which path Self believes ultimately will be Martin’s primary role at Kansas, that remains in the to-be-determined category.

Regardless of how it all plays out, or when and where Martin (with the ball in top right photo below) plays which role, seeing him in person has done nothing to change Self’s opinion on how important adding the talented senior guard was this offseason.

“I think he’s going to be a huge addition for us,” Self said. “But exactly how he fits in, he gives us some speed and some feistiness and some energy that I think will be very welcomed.”

Back in the lab 😤 pic.twitter.com/qkycJgo5Id

I thought RussRob came to KU as a shooting guard and converted to some extent out of necessity when Mario really didn’t transition to the point his freshman year.

It sounds good that Remy is a pass first player at this time of year. He’s already proven he can score but this team needs other scorers and the other players need to know he will work to get them the ball.

That’s essentially the same as what MJ went through with da’Bulls, and the reverse of how many games played out later in his career. Once they acquired other options, he would start games feeding the others, but when needed or taunted, he would take over offensively.

Remy is not MJ, but the scenarios are similar. There are lots of options on this team that he needs to have fully engaged for everyone’s success. There are always times though when the team will need an alpha dog to step up and get a basket. He can do that.

Excited for this year.

NBA scouts and GMs must have told him that they'd like to see more of what he can do as a facilitator. If that's the case and if he totally buys in to it, that could create the base case scenario for KU this year. To have a skilled all-American caliber PG working to keep his mates involved but is fully capable of closing out as a scorer in crunch time.

Glad to hear coach mention his feistiness. I think the best teams have an aggressive edge, chip on the shoulder, whatever you want to call it. We need bad dudes, alpha dawgs. The Morris twins type mentality. Ochi so smooth, but we need some angry type players too.

Love the the off-season when visions of MJ dance through our heads. Never Bird or Magic, interesting.

Who will be the Alpha, Tua, or Omega of our team?

Facilitate I say to your hearts content. Reach for the stars, no matter how far.

This is your Quest my Don Quixote's.

Ancient Greek, Man of Lamancha and MJ applied to college basketball, does it get any better than that?

Back to reality - Remy do what coach tells you and bring your Dagger just in case we need it.