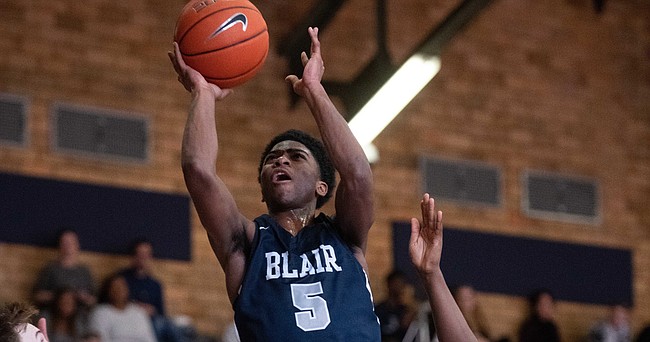 Next years team is shaping up rather well. I had no doubt that HCBS would recruit some athletic bodies to fill the holes left by the departing transfers.

I would be very surprised if Agbaji and Wilson will leave.

Garrett likely, but the previous two likely are getting evaluations on what to work on. Agbaji has some improvement on his 3 point percentage and going to the rim. Wilson has some consistency to improve and to finish his mid-range jumper. I'm not a scout nor a talent evaluator.

I do know neither is projected in the first round and if they are included in the second round it is picks in the 58-60 range, so unlikely to leave early.

Agreed on all points

I imagine Ochai and Jalen will be back. Both can really improve their draft stock, I think

Hi Matt - Question. If they enter the transfer portal, does that ALWAYS mean they're gone? Would assume most have a school in mind when they do but...

i hope you're right, jeff.

Highly recommend this video if you want to get to know this young man better!

That was so cool. Thanks for the link. I like this kid already! Wish him all the success in the world.

A lot of heart here. It opened mine just to view it. We're getting a good kid, Devonteesque.

Why do people keep saying Ochai will be back? What does playing another year get him in his quest to play pro ball? His potential at the next level is based entirely on his athleticism and to a lesser extent his outside shot mechanics,” he’s not going to improve his draft chances with another year of the same play. He’s not coming back and this announcement just solidifies that. Wilson does have a jump to make production-wise so should be back

Because if he dont come back he wont get drafted and either going overseas or to the d-league . He needs to improve his shooting percentages and driving to the hoop .

Good rec Eliot. He should be a fan favorite.

As a conservative estimate, if only 5,000 new students per year for say 50 years then it’s a quarter million fans and likely much more than that.

Indeed. I thought that was a funny quote from Self, jumping from 100,000 to a million KU fans in the world so quickly. I know a TON of KU fans that never attended KU. Mostly general Kansan population but I've run into some random one's all over, whose parents were fans, or a sibling or someone else had a link to KU. Let's say half a million... ;)

Agreed Eliot. I’m a first generation Jayhawk, and an anomaly in my family. Another sibling and I have been extreme north to south and east to west. She’ll comment on finding us everywhere.

I too thought it was conservative. Even if you take half of the KS population (3M), that alone puts us past a million.

It always amazes me when people project their complacent lives on these athletes and coaches; thinking they won’t develop. Some fade into obscurity but over and over again the ones that stay prove the naysayers wrong. Athleticism will get you through HS to college but there’s a lot more to be successful.

DUNK YOU VEWY MUCH!!!!!!! This is what I call a DREAM TEAM. We've got all ingredients to win it all next season. It's up to coach BS to do his magic -

Can coach make use of each individual's potential & strength to the max, or will he stick with low post and weaving offense, emphasize on Defense? If he can't come up with better offense strategy, we'll definitely see a mass exodus part deux.

not a surprise. well they can't all be 1st round draft choices.

More reasons to keep the faith