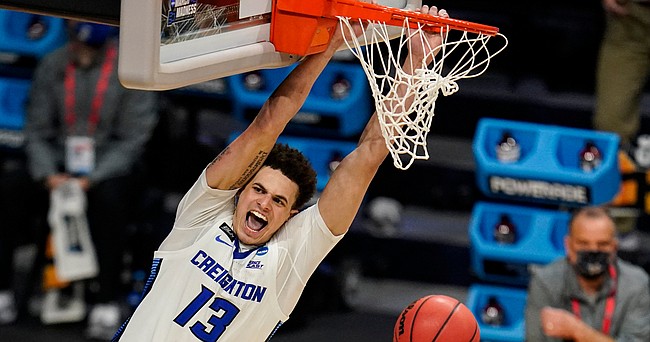 Creighton forward Christian Bishop (13) follows through on a dunk against Ohio in the second half of a second-round game in the NCAA men's college basketball tournament at Hinkle Fieldhouse in Indianapolis, Monday, March 22, 2021.

There’s certainly no guarantee that something big will not happen on Friday.

That’s just kind of the way things have gone with the Kansas men’s basketball program for the past few weeks.

But if there’s not, we now know the next big day to circle on the KU hoops calendar — Saturday, April 17.

That’s when Creighton transfer Christian Bishop plans to announce his future plans, according to an Instagram story by Bishop on Thursday evening.

The 6-foot-7, 220-pound slashing forward from Lee’s Summit (Mo.) West High just finished his junior season at Creighton, where he averaged 11 points and a team-best 6.4 rebounds per game in 31 starts.

Bishop is down to a final three of Kansas, Texas and North Carolina.

A big reason for those numbers were his 88 dunks over the past two seasons.

A former four-star prospect out of high school who ranked No. 103 overall by Rivals.com in the 2017 recruiting class, Bishop began his basketball career as a point guard before growing 12 inches during his high school days.

After playing just 9 minutes per game as a freshman at Creighton, Bishop blew up in Year 2 — thanks largely to the confidence he gained from his performance during the team’s summer trip to Australia — and started all 31 games while average 8.6 points, 5.3 boards and 1.1 blocks in just under 22 minutes per game.

In KU’s win over Creighton in a Top 5 showdown at Allen Fieldhouse last December, Bishop nearly delivered a double-double, scoring 13 points on 5-of-6 shooting and grabbing nine rebounds in 29 minutes.

He also blocked three shots that night and made his lone 3-pointer of the entire season.

Dushawn London, of 247 Sports, recently caught up with Bishop to break down his finalists and the former Creighton forward said all three programs had a style of play that would fit his skills.

Asked for his thoughts about the Jayhawks, Bishop spoke to program’s tradition and the success of KU coach Bill Self as big selling points.

“They have a great history,” Bishop said of KU in an interview with London. “I’m from Kansas City, Missouri, so it's only 45 minutes away so that's a nice location. Coach Self is a good man who believes in his players and he always has a good program. That's winning basketball — they always have a winning brand. I also like how they get up and down the court. They're a fast team and (they) do a lot of things well that I also do well.”

Bishop pointed out that even though UT and UNC both have new head coaches, in Chris Beard and Hubert Davis, their personal track history along with the tradition at both schools was also attractive.

Bishop told London that finding a school that will help him develop into an even better pro prospect in a family atmosphere played a big role during this round of recruiting.

“I want a place that is like home and where I can play with good players who care about you,” he said. “I want a good feel with the team and to have no problems. It's difficult to learn about that stuff right now, but at these schools players are reaching out to me to say what's up so that's been cool. There's good people around wherever you go.”

Man, would love that guy on the team. Love his game.

With Ochai and Wilson returning, and the new transfers, this team may be extremely talented and tough to beat! I am sure the Chicken Littles will say Ochai and Wilson are gone, HCBS can’t recruit, etc., etc.! With Roy gone at NC and Beard moving to TX, KU may be the landing spot for Bishop? Wouldn’t it be something if Garrett does decide to return? Next year’s team is looking better and better, every day!! Rock Chalk Jayhawk, KU!

I know most of you will disagree but I almost feel like it would be addition by subtraction if Wilson and Ochai didn't return. I know they represented a big chunk of our scoring but they were just very inconsistent all season long and I don't really see them getting much better (hope I'm wrong), but they'll definitely soak up a ton of playing time if they return. I do expect both of them to return though.

IMO, Wilson will be a star. He needs one more year to get his head right, but when he does...he will be a monster. Ochai is solid and was fairly consistent this year, so I wouldn't say no to a guaranteed 14 per night. Again...just my opinion. RCJH!

Mike, you are spot on.

fair opinion, however I don't believe that the way that we will achieve consistency is by losing two of our top 4 best players (3 of 4 counting Marcus) and replacing them with newcomers.

It's more getting a jumpstart on rebuilding by giving more crucial development time to newcomers with higher ceilings so we can be better over the next 2-3 years.

time to update the scholarship tracker:

We keep hearing about Bishop and Ty Ty. Of course we could add both if one of the two NBA draft prospects elects not to return.

I don't see where Bishop fits into the lineup and offense/defense Self runs. Bishop is too small to play against bigs inside on D. He can only score very close to the hoop. His ball handling is not that great. He definitely is not a good shooter from outside of 6 feet. Can't put him down low on offense and expect him to get position and score. Won't be a great rebounder on either end.

He can slash from outside if someone can dish him the ball and take an open lane to the hoop, catch an occaissional ally oop and finish but he's not going to pull up and shoot over a defender. Not going to take the ball and drive by a defender very often. He fit into Creighton's offense great, wasn't an outside player, they spread the floor and have shooters everywhere. His high percentage looks great but Azubuike had the best FG% ever and we all would have screamed at the TV if he was taking 10-15 foot jumpers. I just don't envision him being a fit for this team.

Texas is a perfect place for this young man.

Quietly Chris Beard is building a team at Texas ,with Bishops commitment Beard has signed 7 players this week as he building a team like Scott Drew and Baylor will be a force to reckon with next year as well. Next year will be interesting for sure

My fear with all these new players coming in, is playing time. If Agbaji and Wilson return, then that is two spots taken up, that these new recruits will be trying to get time on the court. We could see a repeat of what has happened the last few weeks, of people jumping into the transfer portal because of lack of playing time. HCBS is a master at manipulating line ups to get results, but it seems that a lot of these kids don't want to put the time in to get a starting spot, but want to come in right away and play. Look at Frank Mason and Devonte Graham. They stayed four years, put in time developing their games, and it paid off huge dividends. Maybe Self could do what the 2011-2012 Kentucky team did with all these new recruits, have an A and B team, and rotate them in groups of five. They sure wore us down in that championship game.