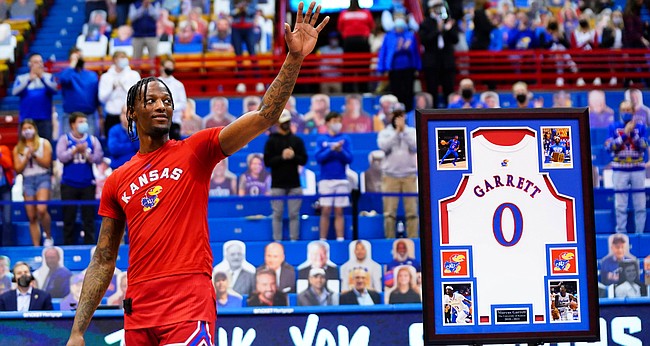 Kansas guard Marcus Garrett waves to the crowd as he is honored before tipoff on Senior Night, Saturday, Feb. 27, 2021 at Allen Fieldhouse.

Kansas senior Marcus Garrett picked up another individual honor on Friday, earning a spot on the Senior CLASS Award’s All-American first team for the 2020-21 season.

Garrett, a combo guard from Dallas, who has won a number of individual awards during his time as a Jayhawk, was joined on the first team by this year’s Senior CLASS Award recipient Luka Garza, of Iowa.

An acronym for Celebrating Loyalty and Achievement for Staying in School, the Senior CLASS Award celebrates the total student-athlete and encourages students to use their platform in athletics to make a positive impact as leaders in their communities.

To be eligible for the honor, a student-athlete must be classified as an NCAA Division I senior and have notable achievements in four areas of excellence: community, classroom, character and competition.

In addition to excelling on the court, Garrett was a 2021 Academic all-Big 12 first team selection and is a three-time member of the Athletic Director’s and Big 12 honor rolls. Last fall, Garrett recorded a 3.74 grade-point average.

This season, Garrett was named to the 2020-21 All-Big 12 Second Team for the second consecutive year and also was selected to the Big 12 all-Defensive Team for the third consecutive season. Last season, he was the 2020 Naismith, ESPN and Big 12 Defensive Player of the Year.

No official announcement has been made about Garrett's future. Should he desire to return to Kansas for another season, he would be eligible to do so thanks to the NCAA's decision to grant all athletes from last spring through this winter an extra year of eligibility due to the COVID-19 pandemic.

After KU's season-ending loss to USC in the second round of the NCAA Tournament, Garrett, who is scheduled to graduate in May, spoke about what Kansas coach Bill Self had meant to him during these past four or five years and sounded a lot like a player who had made up his mind to move on to the next chapter in his basketball career.

If he will stick around our team will have a real chance next season. Congratulations to Marcus Garrett on this achievement, a true honor.

Class is a perfect word for Marcus -- one of my all-time favorite Jayhawks. Well-deserved!

Well deserved. Congratulations to Marcus. He was clearly the heart and sole of a team that overachieved (based on talent level). Rock Chalk.

Congratulations Marcus! It was a joy to watch you play and never give up on a game. I am very proud of you for being a KU Jayhawk for life..

Selfishly I'd love to see Marcus take advantage of the NCAA Covid allowance for players to come back for one more year of eligibility. He's got a terrific attitude and has represented KU very well as a student athlete.

Marcus has earned this recognition and he has earned his chance to go pro. He likely will make a solid player in any of the top level leagues overseas, and if he can develop into a reliable option to knock down open threes he could be a good role player in the NBA as a perimeter defender.

He's got a bright future.