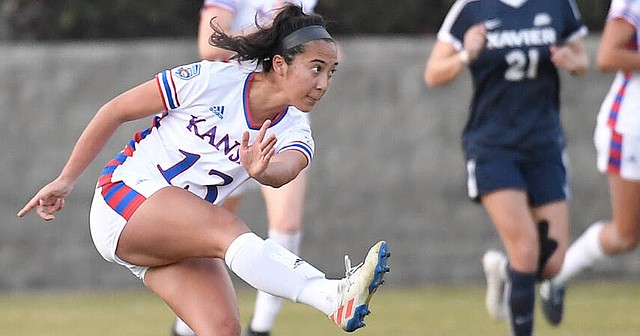 The University of Kansas soccer team improved to 2-0 on the season with a 1-0 victory over Texas Tech on Friday night in the team’s home opener at Rock Chalk Park.

Despite trailing Texas Tech (0-1-1) 6-4 in shots attempted heading into the final 15 minutes of Friday’s contest, the Jayhawks got the one shot they needed when senior midfielder Kathryn Castro floated a ball from 30 yards out into the back of the net in the 80th minute.

After the match, Castro explained her game winner during a postgame interview on the ESPN+ broadcast.

"I'd like to say it (was) a shot," she said with a laugh. "At that point, it's all mentality and I took it and I prayed to the lord that it was going to result in a goal."

Added KU coach Mark Francis of his team's effort: “You grind away. We didn’t have a ton of chances today and, to be fair, they didn’t either. There really wasn’t a lot of chances in the game, so it really comes down to someone finishing one of them and fortunately for us, Kat did. I thought Kat was brilliant today.”

The goal was Castro’s first of the season and slipped into the net just over the head of the Texas Tech goalkeeper who appeared to be a little caught off guard by the high floater.

KU junior Sarah Peters collected yet another shutout in goal for the Jayhawks, pushing her career total to 22 and moving her within six of tying the program's all-time mark.

KU now leads the series with Texas Tech, 14-11-3 all-time. The Jayhawks own a 9-3-0 record against the Red Raiders in Lawrence and are 15-6-1 in home openers during 22 seasons under Francis.

Friday’s game was KU’s first since a season-opening victory at Texas on Sept. 11. KU was supposed to open its home schedule last Friday against Oklahoma, but OU’s roster had issues with positive COVID-19 tests and could not play.

That game has been rescheduled for Nov. 15 in Lawrence.

Next up, Kansas will travel to Manhattan next Friday for a 7 p.m. showdown with Sunflower State rival Kansas State.