Kansas volleyball holds off Baylor in 5 sets in season opener 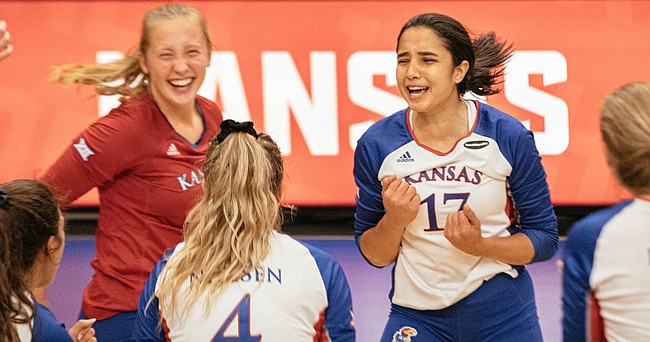 The Kansas volleyball team opened its season in thrilling fashion with a 3-2 victory over Baylor at Horejsi Family Volleyball Arena on Friday night.

But the Bears, who reached the Final Four in 2019 and finished ranked third in the national polls, pushed the match to a decisive fifth set with a 25-19 victory in the fourth.

The Jayhawks responded by scoring the first four points of the fifth set and built an 11-5 lead en route to a 15-9 victory in the finale.

Match point came on a smash from junior middle blocker Rachel Langs, whose shot to the back right corner off of the set of Sara Nielsen (44 assists) overpowered the BU defender.

The game winner was one of four kills from Langs during the match.

As a team, the Jayhawks hit .365 on the night (compared to just .278 by Baylor) and were led by four players reaching double digits in kills. The Jayhawks were credited with just 14 attack errors while Baylor (0-1) tallied 26.

As part of the Big 12’s pandemic-inspired doubleheader schedule for the 2020 season, the Bears and Jayhawks will return to Horejsi at 4 p.m. Saturday for their second match of the season.

Working for it, and coming through in crunch time - nice!

It would be interesting to hear what Coach and the ladies think about the double header.

Nice, competitive performance by the team Friday, not so much on Saturday as we go down in straight sets (14, 19, 15) that weren't very competitive at all.

Hope you are doing well. You and i both know, transferring of Christon and Ennis, and Hickman meant this team was starting over again, now this team has not jelled, but it is up to Coach Bechard to see that it grows together, and improves as season goes on, something his last 3 teams have not done.