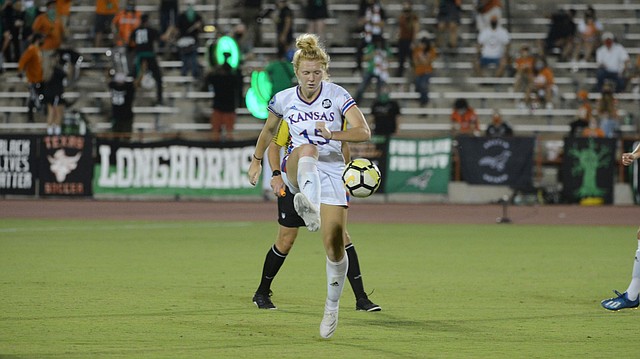 A late goal from senior midfielder Ceri Holland lifted the Kansas women's soccer team to a 1-0 victory in the season opener at Texas on Friday night.

Holland's goal came with nine minutes remaining and was assisted by Avery Smith, who gained possession of a loose ball near midfield and raced into the Texas half looking to make a play.

The goal was the 11th of Holland's career and the 14th game-winner a KU player has scored in the final 15 minutes of regulation or overtime since the start of 2018.

"It was a tough game," Holland said after the victory. "They threw a lot at us and we threw a lot at them. It was all down to mentality. In the end and I think the whole team came together. It’s a great result for us on the road."

Junior goalkeeper Sarah Peters collected seven saves in the game, including one that she tipped over the crossbar midway through the second half to keep the game scoreless. That effort produced the 21st shutout of Peters' KU career, moving her within seven of tying the program's all-time mark.

Kansas is now 13-7-2 in regular-season openers during Mark Francis’ 22 seasons as head coach and has won their season debut in each of the last three seasons.

Next up, the Jayhawks will play host to Oklahoma at 5 p.m. Friday at Rock Chalk Park in their 2020 home opener.