The last time these two teams met, just a year ago in Lawrence, the Kansas offense underwhelmed. The play-calling was uninventive and the Jayhawks rarely spread the field to play to the strengths of their best athletes. The result? Not only a 12-7 final score that one might expect to find in the KU football annals, but worse, a nonconference loss in a winnable game.

Even though head coach Les Miles didn’t announce a starting quarterback ahead of the season opener versus Coastal Carolina, the offense figures to look more modern, creative and effective with coordinator Brent Dearmon in charge this time around.

The Jayhawks may not have Carter Stanley at QB anymore, but they have their key skill players returning with running back Pooka Williams and receivers Andrew Parchment, Stephon Robinson Jr. and Kwamie Lassiter II. If Dearmon keeps those four involved and productive, KU should find it much easier to put up points against Coastal in the rematch.

2. Make it easy on your new QB

Whether it’s senior Thomas MacVittie or junior Miles Kendrick taking the snaps, KU can ease its new QB into this season by game-planning for heavy doses of Williams.

KU’s preseason All-Big 12 running back, of course, has a habit of breaking tackles and making defenders miss when he is given the ball in space. Williams last year rushed for 121 yards at Boston College, 137 yards versus Oklahoma, 190 yards at Texas, 154 yards at Iowa State and 116 yards against Baylor — and it's that type of day KU could use from him in Week 1. Williams is small at 5-foot-10 and 170 pounds, but the Louisiana back has proven time and again he can handle a big work load and the hits that come with it.

Plus, the Jayhawks think sophomore running back Velton Gardner could be equally explosive this season. So if much of the QB’s responsibilities involve handing the ball off or tossing it to Williams or Gardner, those throws he has to make on passing downs might come a little easier.

3. Beware of Chants on 4th downs

A stop on 3rd down versus Coastal doesn’t necessarily mean a win for the KU defense. CCU head coach Jamey Chadwell showed in 2019 he doesn’t mind being assertive on 4th downs, and the approach worked well for the Chanticleers.

Coastal finished second in the nation in 4th down conversions last year, going 23-for-29 (79.3%) when Chadwell decided to keep the offense on the field instead of turning to special teams.

One of those successful gambles came at KU last year. With less than 9 minutes left in the fourth quarter in the 2019 matchup, CCU had 4th-and-1 at KU’s 41-yard line and went for it. Running back CJ Marable didn’t only convert, he gained 27 yards. 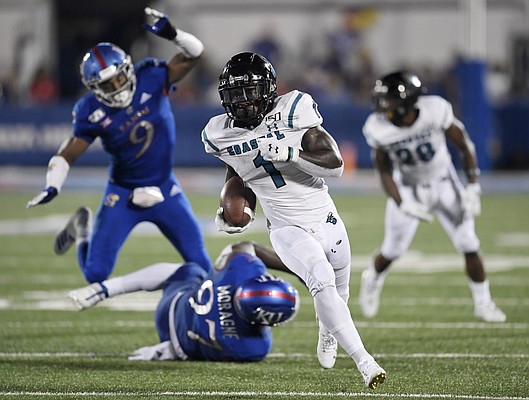 If there was one man most responsible for Coastal’s first-ever victory against a Power Five program last year, it was Marable.

CCU’s star back repeatedly gashed the KU defense, finishing with 148 rushing yards on 24 carries. Plus, Marable’s one reception resulted in a 20-yard touchdown. Considering Marable averaged 6.7 yards per offensive touch the last time he played at KU, it’s safe to assume the 5-10, 200-pound back will be looking for more to kick off his senior season.

Now that KU defensive coordinator D.J. Eliot and his returning players know from experience what Marable is capable of, they’ll have to execute a plan that averts an encore performance.

The Jayhawks’ 3-4 defensive front will look different this season, too, and Eliot will need his upperclassmen at D-line and in the linebacking corps winning at the point of attack if KU is to slow down Marable, a 1,000-yard rusher a year ago. If ends Malcolm Lee and Caleb Sampson and nose tackle Sam Burt can disrupt at the line of scrimmage, linebackers Dru Prox, Kyron Johnson and Denzel Feaster should find it easier to keep Marable under wraps.

Asked this week about last year’s loss to Coastal, senior receiver Parchment called it a blur. But that’s not to say the Jayhawks are over the result or have forgotten the feeling of walking off the field in defeat.

“I’ve still got a bad taste in my mouth,” said Parchment, who had already rewatched the game a couple of times when he spoke to reporters on Monday, “and I’m ready to go out there on Saturday.”

It’s an easy sentiment to embrace for the Jayhawks, and though some downplayed publicly the retribution angle to the rematch, it’s no doubt an extra incentive as the season finally kicks off.

Is anyone else having trouble accessing the KU Message Board?

You're not alone, Garry... And we're looking into it. Thanks!

Thanks. Hope you can get it resolved.

Matt, I'm still not able access the message board. Has anything been figured out?

If Marable and their O has a repeat performance; if our D does no better than last year, I’m ok with it. This is all about our O having some sort of credibility.

And while Pooka is obviously talented, it’s obvious to the opposing D as well, which is why they stack the box. Whoever the QB is, they have to complete a high enough percentage to force the D to respect the field.

Coastal gonna put up 34 points? Not so sure about that. I can see KU scoring 38 or more if they don't do the same stupid crap from the same game last year.

I have talked fire in the belly issues before....I was a Charlie Weis fan until I saw a lack of fire in the belly....Miles is just like Weis...no fire...we should have blown out Coastal...the thing about fire in the belly...you can immediately channel it...if you have the desire to....Will Miles start getting serious....its all about effort...how badly do you want to be successful ...all out effort at everything you do...Do I have to come to Lawrence to instill this in these kids and in the whole administration what it takes to be a champion?...Fire in the belly....get with the program people!