Kansas cornerback Aqib Talib high-steps into the end zone after picking off a pass during the first half as quarterback Tyrod Taylor (5) pursues. Talib was named MVP of the Jayhawks' 24-21 victory over Virginia Tech in the Orange Bowl on Thursday in Miami. Kansas University athletics officials have scheduled a free public event to celebrate the football team's Orange Bowl victory.

Former University of Kansas All-American and Super Bowl 50 champion Aqib Talib has decided to call it a career.

Talib, who starred with the Jayhawks for three seasons from 2005-07 and won Super Bowl 50 with the Denver Broncos in 2016, playing alongside fellow former Jayhawk Chris Harris, announced his retirement on Wednesday morning on Twitter.

Instead of covering wide receivers in 2020, Talib is jumping into the podcast game.

He’ll join Harrison Sanford on a new multi-platform podcast project called Call to the Booth, with new episodes airing each Wednesday and Thursday throughout the 2020 season. 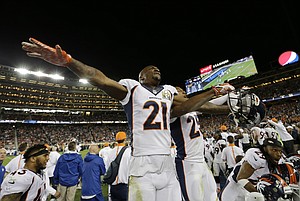 “Football gave me so much in life,” Talib said. “I’m addicted to it now. I can’t get away from the game. That’s why I’m in the booth now.”

Talib’s plan was to play one more season before retiring, presumably earning the veteran minimum of between $5-$6 million for the 2020 season.

And he did have an offer. According to Talib’s Twitter video, New England coach Bill Belichick called him and offered him “the role of a lifetime.”

“He really wanted me to come in and strap tight ends,” Talib said. “I was halfway out the door. I got flights. I started finding apartments. … If I can make $6 million dollars and guard tight ends all day, I’m cool.”

That led to one thought.

“Can I even strap these damn tight ends,” he asked himself. “Once I said that, once that thought crossed my mind, I was like, my heart, my competitive edge, I ain’t really in it like that no more. I just wasn’t feeling it no more.”

And with that, a 12-year career that led to five pro bowls, 35 interceptions, 10 taken back for touchdowns and, of course, the Super Bowl ring with the Broncos, had come to an end.

After helping lead the Jayhawks to the 2008 Orange Bowl title — most notably with his famous pick-six, 'I felt like Deion' interception — Talib was drafted in the first round of the 2008 NFL draft by the Tampa Bay Buccaneers.

He played four-and-a-half seasons in Tampa before joining New England for two seasons and moving on to Denver for four more.

He finished his career with the Los Angeles Rams, where he battled injuries and started in all 13 games he played in for the Rams in 2018 and 2019.

Much love to everybody who played a part in my career. Sorry I couldn’t join you in New England Bill! You’re welcome to come on the show! ⁣
⁣
Get the full details with the link in my bio and follow @calltothebooth for more. pic.twitter.com/cuUuQVkzQm

Boy, talk about being able to be honest with yourself. And being big enough to walk away from $5 million.

An all time KU great. Have always loved him. Colorful as all get out but the dude always walked the walk.

Well said Brett. Loved him when he was here and that he was one of those unheralded 2* diamonds. Really appreciated seeing his honest thoughts too. A glimpse at how differently pro athletes are wired.

Super success to you Aqib!

love aqib. curious brett didnt go after his off the field antics (guns & such), like u know, he does w Self, all day. Agree that Talib is the man, but disagree w brett cuz hes a moron. "Aqib talib" .. isnt it against conservative kansans to root for muslims?! allahu akbar!!

I’m a liberal. Maybe that will help you?

Also, I missed the announcement from KU that Talib has been coaching at KU the last 15 years. Man, I need to keep up.

Prrof you can't teach speed! Have a good life Aqib!

He went out on top.. Couldn't be better.