Barring any unexpected developments between now and Saturday night, it seems most of the Kansas football team’s starting lineup for the upcoming season opener is set.

The Jayhawks unveiled their first public depth chart of 2020 on Monday, and only two starting jobs on offense remained unresolved. The defensive two-deep didn’t include any either-or scenarios.

As head coach Les Miles throughout preseason practices hinted would be the case, KU’s starting quarterback spot remains up for grabs heading into the team’s debut versus Coastal Carolina. It will be either senior Thomas MacVittie or junior Miles Kendrick leading the offense — or maybe even both of them taking turns, Miles revealed during his Monday video press conference.

The only other ongoing position battle on offense comes on the offensive line, where seniors Chris Hughes and Adagio Lopeti are listed as possible starters at right guard. 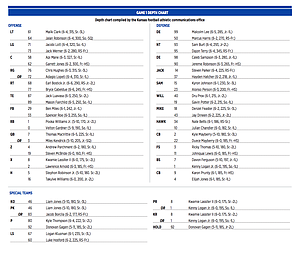 With four-year starter Hakeem Adeniji now on the Cincinnati Bengals’ roster, KU needed someone to replace him at left tackle. That responsibility will go to the man who played next to Adeniji a year ago, former guard Malik Clark, now a senior.

A far cry from the QB situation, the starting spots were obvious at KU’s other skill positions, of course. Star junior running back Pooka Williams sits atop the depth chart, as do senior receivers Andrew Parchment, Kwamie Lassiter II and Stephon Robinson Jr.

And when coordinator Brent Dearmon wants an extra blocker on the field, KU’s first-string fullback again will be junior Ben Miles, a starter in eight games in 2019.

Up front, KU expects to start three upperclassmen on the defensive line, with juniors Malcolm Lee and Caleb Sampson as ends, and junior Sam Burt at nose tackle.

On the outside, though, KU will rely on a much younger talent, with redshirt freshman Steven Parker manning the Jack spot, essentially serving as a linebacker/defensive end who stands up near the line of scrimmage with the primary job of rushing the passer.

The starting Hawk position, a spot that can act as an extra strong safety, goes to redshirt senior Nate Betts.

The Jayhawks are likely to start senior Ricky Thomas at free safety and junior Davon Ferguson as the box safety.

Senior Kyle Mayberry was an obvious choice for one of the starting cornerback jobs, while the other, in a bit of a surprise, currently belongs to true freshman Karon Prunty.

A little more uncertainty exists on special teams, though. For one, KU coaches have yet to award field goal and extra point duties to one kicker. Both senior Liam Jones and redshirt freshman Jacob Borcila are candidates.

When it’s time for KU to return punts and kickoffs, the job could belong to either Lassiter or sophomore Kenny Logan Jr.

The other specialist jobs are solidified, with senior Kyle Thompson at punter, senior Logan Klusman at long snapper, junior Donovan Gagen as the holder and Jones handling kickoffs.

Benton, will the schedule be updated soon? It still shows last season. Thanks.

So about the depth chart. Pretty much all are Juniors and Seniors recruited by Beatty. Sophomore LG Jakobi Lott, Freshman Jack Stephen Parker, and Freshman CB Karon Prunty are the only three underclassmen recruited by Miles. Thats speaks to their immediate talent and even better KU gets to start them for years to come. As the season goes I am sure a couple of spots will change but what this says is that the talent Beatty brought in has developed and is good enough to hold their positions and that KU is finally at the point of having some depth and talent. So here is my preseason prediction...KU improves over last year....and with only 10 games will likely go 3-7...had we two more non-conference games I would have said 4-8. If KU finds a QB early, then maybe we have a chance of being even a smidge better than this prediction.

And that speaks to the talent of the current coaching staff to bring out the talent. Just look at Carter Stanley under Beaty's staff and then under Miles' staff. There was not enough talent under Beaty but there was latent talent but he and his staff did a poor job of bringing it out and of using that talent in game situations.

So true. Maybe mostly.?! Beatty was certianly a terrible game day coach and IMO the worst game day coach in KU history, although Fambrough's "up the middle", "2 yards and a cloud of dust" offense was certainly infuriating.

To preface, on the one hand, Beaty pretty much had zero Senior talent the first two to three years, but, he did recruit a few good players, like Pooka, that came to KU with talent, and still Beaty failed to take advantage of it or develop talent around it. IMO, Beaty was just in over his head.

So Brian thinks that a lineup full of Juniors and Seniors is a testament to the worst coach in college football history? Did you think Miles was going to start 22 freshmen and sophomores that he recruited?

Remember, Miles had about 48 hours to put together his first recruiting class. And this is not intended as a criticism towards them individually, but collectively that class will be the weakest class Miles ever has at KU. These are your sophomores or redshirt freshmen.

Miles’ second class didn’t get a spring camp and almost no summer program, but you expected them to leap past everyone who has years of experience?

David Beaty did the minimal amount of work needed to keep his job. Yes, he recruited players. Let’s build him a statue!

Miles is doing what every good coach does when he comes in after a historically bad one: work with what he has, develop his roster and start grinding. That’s a testament to Miles, not to neat deal.

Pretty sure Beaty is not the worst coach in college football history.

I'm not even sure he's the worst coach in program history. Bob Valesente sets the bar pretty low!

I agree with Brian and Dale. Beaty did recruit some talent, period, end of story. It’s fact. It’s also fact that, for whatever reason, he nor his staff could translate that talent to the field. Les Miles said on day one that there was talent on the roster. Yes, Miles and company have had much better success in bringing it out of the players. We still are not recruiting good enough players to win tons of games. Will we be more competitive? Yes, I believe so, but how long can we be “competing” and still lose before the grumbling starts. He gets the nod for a couple more years, but when all recruits have signed and we are ranking 8 or 9 in BIG XII recruiting time after time, that will not equate to lots of wins.

Steven - Generally in agreement with you though it is hard for me to rectify the phrase “recruiting talent” with being regularly ranked at the bottom of the conference. I would suggest that he recruited creatively (Many players like Adeniji that came in late or JCs that came with 3 or 4 years to play.) and developed individuals as seen by many unheralded recruits going on to win awards and at least get shots at the next level.

Also, definitely agree with you in concept that he never put all the pieces together well enough to be successful, mostly on game day.

Pretty sure Beatty started with the most depleted roster in the history of FBS, below FCS standards, which is reflected in W-Ls, but is not a reflection of ability. That being said, Coach Beatty never developed into the HC he needed to be. This was an open and obvious condition/requirement from the beginning, but also a result of having an assistant coach’s salary.

Pretty much Beatty inherited a program as similar to recovering from a death penalty as you can get. 28 scholarship players inherited( and most were Sophomores), plus Beaty added 24 incoming recruits with a high number of Juco transfers he had to fanagle, and 60 walk-ons!