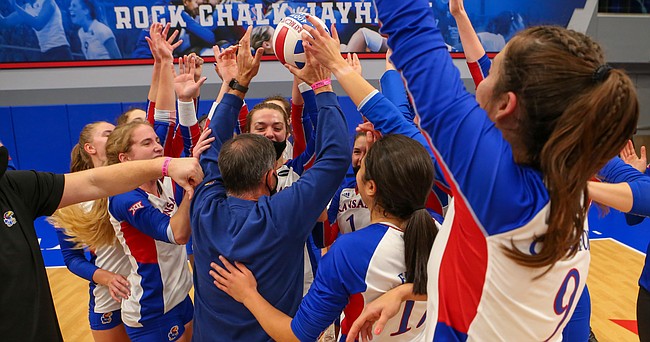 Throughout the past 33 days and seven matches, Kansas volleyball coach Ray Bechard insisted that all his young team needed to get on track was to close out a match and feel good about themselves again.

“This feels a lot different than what we’ve experienced the past several matches,” Bechard said after his team snapped a seven-game losing streak on Thursday night at Horejsi Family Volleyball Arena. “Getting a result like that, against a good team, will go a long way.”

It also will be one the Bechard family remembers for a long time.

Thursday’s victory was the 400th of Bechard’s 23-year KU career.

“You noticed that ball didn’t have a date on it,” Bechard joked of the commemorative ball KU Athletic Director Jeff Long presented to him after the match. “They’ve been holding onto that waiting for us to get this one.”

Asked what the milestone meant to him, Bechard shrugged.

“It means I’ve been living my dream job for a long, long time,” he said. “It’s pretty surreal.”

Getting it with a young group, against a young and talented bunch on the other side of the net, only made it more meaningful for the Kansas coach.

“There’s a lot of good young talent on the Jayhawks and Wildcats right now,” Bechard said. “And that’s good to see. This rivalry’s in good shape.” 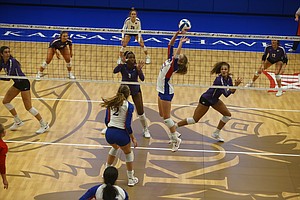 A lot of that young talent played a pivotal role in Thursday’s outcome.

Freshman outside hitter Ayah Elnady was a force in the opening match, recording points off of a block, dig, kill and ace in the first 10 points of the match. Her 11 kills on the night led the Jayhawks (2-7). And her aggressive serving, which led to two aces — of nine on the night for the Jayhawks — set the tone for the way the Jayhawks opened the match.

“Ayah can make it difficult on folks,” Bechard said.

Bechard also said the return of senior outside hitter Jenny Mosser (10 kills and 6 digs) “helped settle us down.”

After a hot start and a 2-0 lead, KU lost the third set and fell behind late in the fourth 20-19. Rather than wilting and letting the 11th-ranked Wildcats (5-4) gain momentum, KU toughened up and started forcing KSU into mistakes.

With the match on the line and K-State’s best hitter swinging away, Crawford and junior Anezka Szabo combined for back-to-back blocks of KSU freshman Aliya Carter (22 kills) to claim victory.

“We just made winning plays,” Bechard said after the victory. “Now, can we show up again (Friday) and put back-to-back efforts like that out there?”

A nice win for sure. Now let's finish the job this evening by winning the 2nd match.

There is talent on this team, but the rebuilding continues. By the way, A&M is undefeated so far this year with christon and Ennis.

I am still amazed at how KU is such a bad serving and receiving team. We make a lot of errors. We are good offensively, and we can block shots, but there is so much more to work on.

Alison McGee has great skills. If the coaching is there, this team has very high potential.