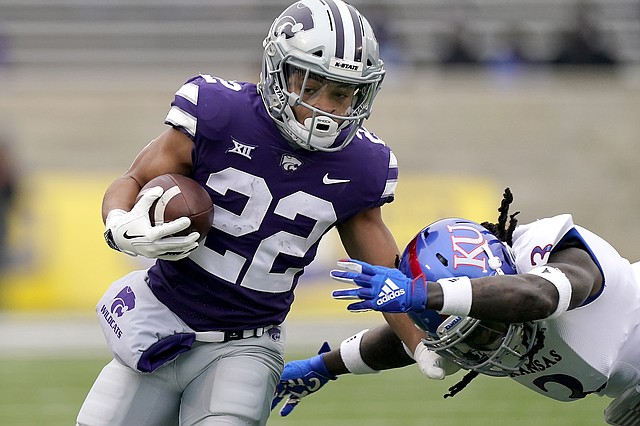 Kansas State running back Deuce Vaughn (22) gets past Kansas safety Ricky Thomas (3) as he runs for a first down during the first half of an NCAA football game Saturday, Oct. 24, 2020, in Manhattan, Kan. (AP Photo/Charlie Riedel)

Whoever claimed that third time's the charm has never met the Kansas football team.

After two long punt returns in the first half by Kansas State, Les Miles and his staff chose to punt the ball down the middle of the field with eight seconds remaining in the second quarter. The result was a punt return for a touchdown by the Wildcats to close out a lopsided first half.

Kansas State scored on two different punt returns and added a pick-six for good measure in a 55-14 win over Kansas Saturday afternoon. The Wildcats (4-1, 4-0 Big 12) have now won 12 consecutive meetings in the Sunflower Showdown, while the Jayhawks fall to 0-5 (0-4 Big 12) on the year.

K-State, under second-year head coach Chris Klieman, is off to a 4-0 start in Big 12 play for the first time since 2014.

Neither offense could really get in a rhythm in the early going, but K-State still had complete control all afternoon thanks to its elite special teams unit. Entering Saturday, the Wildcats ranked second nationally in special teams efficiency according to ESPN. 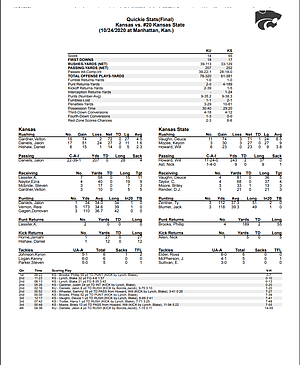 That was on display from the jump, as Kansas State scored its first points of the game on a 55-yard punt return by Phillip Brooks to give the hosts a 7-0 advantage at the 9:22 mark in the first quarter. KSU kicker Blake Lynch then followed that up with a pair of easy field goals to give his team a double-digit advantage.

Justin Gardner took a 24-yard interception return to the house, helping K-State score 20 unanswered points to begin the game. Gardner was sitting on the screen on 3rd-and-8, and picked off Jalon Daniels’ throwback pass with ease.

Daniels, a true freshman quarterback who got the start after missing the last game due to injury, provided the first points for KU’s offense. Daniels scored on an 8-yard touchdown run on a read option on third down, netting the first rushing touchdown of his career.

K-State put the game away with two more touchdowns in the final minute of the first half, including Brooks’ 52-yard punt return on the final play of the second quarter.

It was all Kansas State after that.

• Offensive highlight: KU’s first scoring drive was really the best this offense has looked in quite some time.

The possession ended with a touchdown run, but everything leading up to it was just as impressive. It was a nine-play, 75-yard scoring drive by Kansas that took 3:10 off the clock. Daniels connected on a few different passes over the middle, and it was the most confident the 17-year-old signal caller has looked this year.

Daniels ended the drive with a great read on 3rd-and-3, keeping the ball when the entire K-State defense crashed on the running back. Daniels proceeded to march into the endzone for an 8-yard touchdown run.

• Defensive highlight: As has been the case all year, KU’s defense didn’t play nearly as bad as the final score might indicate.

That was easier to tell early in this game, mostly because of the number of total points scored by K-State’s defense and special teams. KU’s defense forced three punts and made K-State settle for two field goals on the first six drives of the game.

Perhaps the best play came on a nice blitz by Gavin Potter off the edge on 3rd-and-5, which forced K-State to get rid of the ball quickly. The play didn’t work, and the Wildcats chose to kick a field goal even though they originally started the drive on the Jayhawks’ 19-yard line.

Kansas State eventually pulled away, but the Kansas defense had another solid start this weekend.

• Up next: Kansas will play host to Iowa State at 11 a.m. Saturday at David Booth Kansas Memorial Stadium.