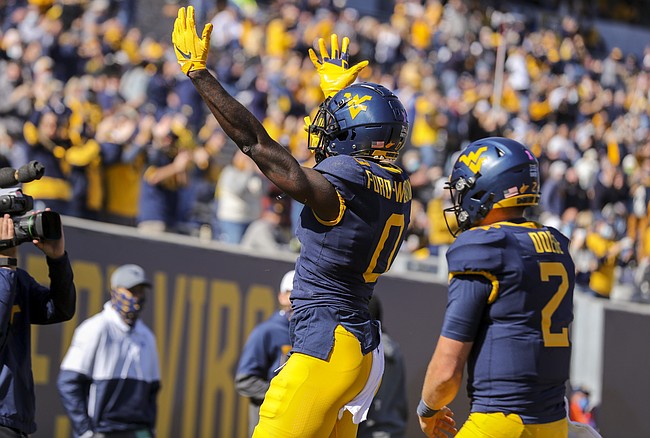 Playing without its head coach on the sideline, it was a familiar result for the Kansas football team on Saturday. KU jumped out to a 10-0 lead, but gave up 38 unanswered points in a 38-17 loss to West Virginia in Morgantown.

The Jayhawks fell to 0-4 on the year following the 21-point loss under interim head coach Joshua Eargle. Kansas has been outscored by 94 points in its three total losses in Big 12 action after suffering a double-digit loss to Coastal Carolina in the season opener.

While the final result appeared lopsided, KU was within striking distance for two-plus quarters. And a lot of that was a credit to KU’s effort on the defensive side of the ball, holding WVU to just 17 points in the first half. The Jayhawks created a pair of turnovers, their first such takeaways of the 2020 season.

Leading 17-10 in the third quarter, the Mountaineers (3-1, 2-1 Big 12) delivered the decisive blow with 3:37 left in the third quarter. On third-and-short, running back Leddie Brown sliced through the middle of the Kansas defense for an 87-yard touchdown run to take a two-score lead. The game was never really in doubt after that. 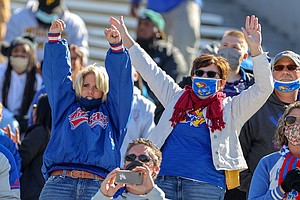 Brown finished with 195 rushing yards on 18 attempts on the ground. He also caught five passes for 36 yards, which included a 6-yard touchdown reception at the 3:25 mark in the second period to give West Virginia its first lead of the day.

Kansas scored the first 10 points of the contest to make things interesting out of the gate. Denzel Feaster forced a fumble on the opening possession of the game, which was recovered by Duece Mayberry. Jacob Borcilla nailed a 41-yard field to give the visitors a quick 3-0 advantage.

One drive later, quarterback Miles Kendrick delivered a 43-yard touchdown pass to receiver Andrew Parchment. The ball was deflected by a WVU defender, but it was a sequence that gave Kansas a 10-0 lead nonetheless. 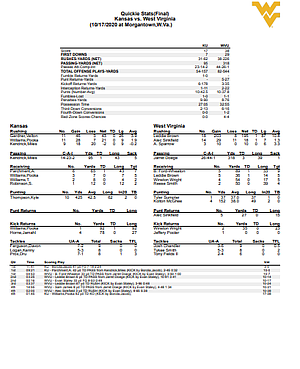 After that, KU’s offense never really got into any sort of rhythm. The lack of quality offensive drives put the Jayhawks’ defense in bad position time after time. It eventually led to the Mountaineers being able to open the flood gates in the second half.

Kansas will travel to Kansas State at 11 a.m. Saturday

• Offensive highlight: It might not have been by design, but the play of the game was KU’s first touchdowns.

The 43-yard touchdown connection between Kendrick and Parchment was one of the few offensive bright spots of the day. It wasn’t pretty, of course, because a WVU defender had a chance to intercept it. But it was the offense taking a chance, and they were rewarded for it.

• Defensive highlight: Kansas forced two turnovers after not having one all year entering Saturday.

Malcolm Lee’s first interception of his career was the turnover selected for this category, however. He intercepted the ball on a screen pass, which was smart play by the defensive lineman. WVU had picked up some big yardage on a few screens earlier in the game.

As an indication of how far this program has fallen, I'm actually okay with this loss. 21 points on the road in college football is not that bad and we beat the point spread.

One more loss thanks to Lew Perkins genius.

Maybe we should blame Roy Williams who had Al Bohl fired who if forced to fire Mangino would not have hired Turner Gill or Charlie Weis or David Beaty.

Defense was great in the first half. We are hurting at the QB spot and OL. Not a Dearmon fan.

Solution? Replace Dearmon with the Army/Navy/Air Force O.C. Put that guy in line to replace Miles when Les retires.

51 road losses suggests we might want to do something dramatic.

I agree that none of our QB's have been shining stars...But Todd Reesing would have a tough time looking good behind this OL.