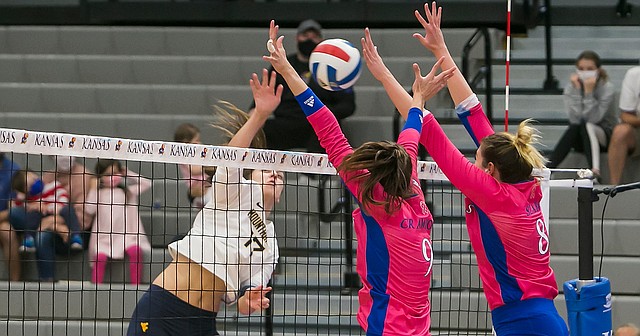 Kansas middle blocker Caroline Crawford, the Big 12's preseason pick for conference freshman of the year, was named the Big 12 Rookie of the Week earlier this week.

A freshman from nearby Lansing, Crawford appeared in all 10 sets of KU's back-to-back losses to West Virginia last week, playing a key role in the team's offensive and defensive game plans.

Crawford recorded a career-high 10 blocks, including five solo blocks, while adding five kills in a five-set loss to the Mountaineers on Oct. 9.

One day later, she delivered a career-high 13 kills in KU's second match with West Virginia. She also added another six blocks, to finish the weekend with 18 kills and 16 blocks.

Crawford and the Jayhawks (1-5) will return to action Friday night, in Norman, Okla., where they will look to snap a five-game losing streak against the Sooners.

Friday's match will start at 6 p.m. and KU and OU will return to action at 4 p.m. Saturday.