TCU running back Zach Evans (6) gets past Kansas cornerback Elijah Jones (4) during the first half of an NCAA college football game in Lawrence, Kan., Saturday, Nov. 28, 2020. (AP Photo/Orlin Wagner)

The Horned Frogs’ rushers proved too unstoppable for the relative absence of an air attack to matter in a 59-23 rout of the Jayhawks. Plus, the KU defense ceased to function on each of Duggan’s three completions — all of which resulted in a touchdown.

“They started out,” Miles said of TCU’s approach, “and had the idea that they were going to push the ball at us and they did. They handled the ball well.” 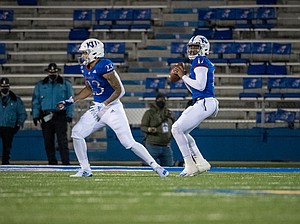 Unexpectedly, KU played three quarterbacks, even before the first half finished. While true freshman Jalon Daniels (4-for-13 passing, 57 yards, one touchdown) remained the starter and didn’t appear to have any lingering ankle issues after getting hurt late in his last start three weeks earlier, the Jayhawks actually brought senior QB Thomas MacVittie in sporadically in the first half — without really asking him to throw. MacVittie carried the ball twice in the opening half on offense, and once more when KU tried and failed on a 2-point try after its first TD of the night.

It was junior Miles Kendrick, however, who orchestrated one of the offense’s most impressive drives of the season. Kendrick didn’t get his shot until the 10th drive of the first half, with just over a minute left before intermission.

The 5-foot-10 veteran provided the Jayhawks with at least a momentary boost, using his right arm to fling four consecutive completions. Kendrick came out firing, connecting with Luke Grimm for 37 yards, Kwamie Lassiter II for back-to-back first downs of 11 and 13 yards, and then going back to Grimm for a 14-yard TD in the front left corner of the north end zone.

Said Kendrick of his approach: “One thing that we preach in the quarterback room is just always be prepared for your name to be called and come in and make plays.”

Miles said after the loss KU took Daniels out so the freshman QB could process what was happening from the sideline. But the head coach also said he thinks Daniels will get the chance to keep his starting job.

That hot Kendrick start wasn’t enough to ignite a fiery comeback for the KU offense after halftime. KU went three-and-out on each of its first two possessions of the third quarter.

In the meantime, TCU padded its already comfortable lead. Operating with the knowledge KU couldn’t stop their rushing attack, on their second series of the third quarter the Frogs ran eight times to gradually cover 53 yards of turf. Darwin Barlow punched in a one-yard TD to cap the drive, and TCU extended its advantage to 45-12 with 5:27 left in the quarter.

Although Kendrick (11-for-18 passing, 166 yards, two touchdowns, one interception returned for a TD, one lost fumble TCU’s Dee Winters recovered for a TD) would lead his second 75-yard TD drive of the night in the third quarter, again capping it with a throw to Grimm in the end zone, TCU all but sealed its win when Kendrick finally made a mistake early in the fourth quarter. Trying to make a quick throw to the right sideline, Kendrick didn’t account for cornerback C.J. Ceasar II, who jumped the pass and kept on running for a 30-yard pick-six, helping TCU push the margin to 52-40 with 14:45 to play. 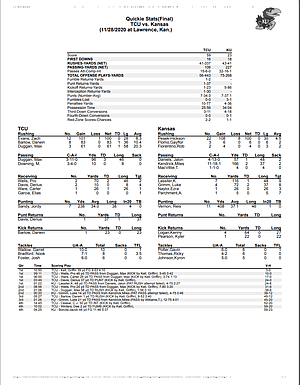 The KU offense, which has floundered most of the season, at least had a couple of bright spots. Freshman running back Amauri Pesek-Hickson ran for 100 yards on 22 carries as the starter, with both Velton Gardner and Daniel Hishaw Jr. out. Miles revealed during his session with the media that Hishaw’s absence was “virus” related.

Lassiter, meanwhile, accounted for 116 receiving yards on his seven catches.

While the Frogs often ate up chunks of yardage on the ground, no play summed up KU’s issues stopping them quite like what transpired on a one-play TCU drive just before halftime.

Frogs sophomore QB Duggan kept the ball as he read the defense, then split a pair of KU defenders at the line of scrimmage, paving the way for him to both avoid and outrun the rest of the Jayhawks on the field for a 58-yard TD.

Yet Miles said after the program’s 12th consecutive loss that he thought the run defense wasn’t the primary problem.

“The issue was those three touchdown passes,” Miles said.

The Jayhawks’ offense appeared dead on arrival through the first three possessions of the night, all of which went three-and-out and concluded with a punt.

But before the conclusion of what proved to be a wild first quarter, Daniels and the offense finally found a taste of success.

By the time KU opened that fourth offensive series, the Jayhawks already trailed 24-0 and had minus-20 yards of offense to their names. But with the help of a couple of TCU penalties on Daniels throws, KU finally picked up a first down.

A pass interference call got the Jayhawks to the right side of midfield, and that’s when offensive coordinator Brent Dearmon dialed up one of his most effective plays so far this season. With receiver Takulve “TK” Williams coming across in the backfield, Daniels faked the reverse handoff, and that gave the TCU defense enough pause for senior receiver Lassiter to sprint open deep. Daniels put a 48-yard bomb on the money for his first career TD pass.

That spark, though, transpired after complete breakdowns in the KU secondary blew the game open early for the Frogs.

Both of TCU’s first two touchdowns in the first quarter couldn’t have been any easier for sophomore QB Duggan. First, he found tight end Pro Wells without a defender anywhere near him deep down the left side for a 46-yard TD. Then on TCU’s next series, the blown coverage from KU’s defensive backs happened on the right side of the field, and Duggan played catch with tight end Carter Ware for a 26-yard TD.

“It was just miscommunication between us on the field,” safety Ricky Thomas said. “That’s something that we’ve got to work on and get better at. We’re going to watch film and see, how can we fix the problem.”

The TCU lead extended to 31-6 when Duggan threw his third and final completion in the second quarter. Incredibly, it was Wells taking advantage of a coverage malfunction yet again that allowed Duggan to hit him for an uncontested 24-yard TD.

Miles grimaced during his postgame video press conference when asked about the sequences.

“As best I could see, I would guess the (tight ends) that came free gave an influence release — in other words they influenced (KU defenders) with a blocking (fake) and then released cleanly, and then left the defender at the line of scrimmage,” Miles said. “And then they took the middle of the field defender away from the play with the route. And wide open (were) three opportunities at touchdown passes. We’ve got to cover those. Everybody runs them.

A disastrous shotgun snap by starting center Garrett Jones on KU’s third offensive series set TCU up for a special teams touchdown. The errant snap flew over Daniels and the QB somehow chased it down for a recovery at KU’s own one-yard line, avoiding a safety or a TCU defensive scoop and score in the end zone.

However, with KU backed up on its own goal line when Reis Vernon punted, the hurried kick didn’t get much air time, to the advantage of TCU and returner Derius Davis. The line-drive punt allowed Davis to take off and evade KU’s coverage for a 37-yard TD return.

The Frogs opened the night looking like they might run the ball down the Jayhawks’ throats, all the way to the end zone. However, after rushes for gains of five, 13, 19, four, eight and five yards — without a single pass attempt — to reach the red zone, KU’s defense came away with a rare moral victory, as the Jayhawks broke up Duggan’s first pass attempt of the evening, forcing TCU to settle for a 39-yard Griffin Kell field goal.

Asked about the team’s morale after yet another defeat, Lassiter said the Jayhawks again will “attack the week” trying to get a win.

“Obviously starting 0-8 is horrible,” Lassiter said. “Nobody wants to do that. I’ve never heard of that. We always attack the week like we’re trying to get this one.”