Quick recap: No. 6 Kansas bounces back with 94-72 win over Saint Joseph’s 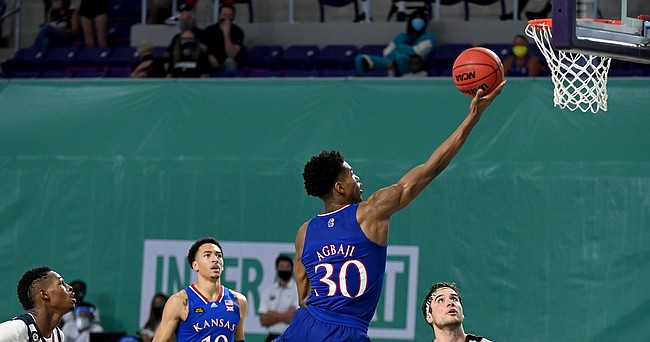 Kansas junior Ochai Agbaji goes up for a shot during a game against Gonzaga in the season opener on Thursday. The Bulldogs earned a 102-90 win over the Jayhawks in the third annual Rocket Mortgage Fort Myers Tip-Off on Thanksgiving Day at the Suncoast Credit Union Arena in Fort Myers on Nov. 26, 2020. Photo by Chris Tilley

One day after surrendering over 100 points in regulation for the first time in 30 years, No. 6 Kansas responded with a strong showing on both ends of the floor in a 94-72 win over Saint Joseph’s on Friday at Suncoast Credit Union Arena in Fort Myers, Fla.

The Jayhawks ended up going 1-1 in the Rocket Mortgage Fort Myers Tip-Off, with a loss to top-ranked Gonzaga on Thursday.

"We won't play a lot of teams that is harder than these two in this tournament to guard as far as our personnel," Kansas coach Bill Self said during his postgame interview on the FS1 broadcast. "This was good for us. Even though it wasn't always pretty today, it was nice to see us have some individual guys make some big plays for us."

Obviously Kansas faced an inferior opponent on Day 2, but there were a lot of good things in the team’s first win of the season. Sophomore Christian Braun poured in a career-high 30 points on 10-of-13 shooting from the floor. He went 5-for-8 from beyond the arc.

Ochai Agbaji and Jalen Wilson both finished in double figures in the win. Agbaji added 18 points on 7-of-13 shooting, while Wilson went 4-for-8 from the floor en route to scoring 14 points. KU scored 1.205 points per possession in the win. 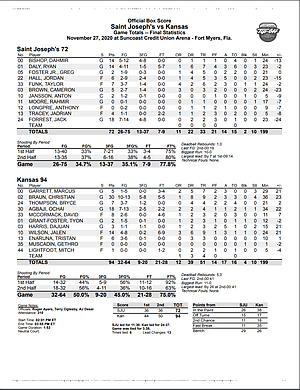 • The game turned when: Kansas took control of things in the first half.

After laboring through much of the first half — and even being down for a strong chunk of it — KU went on a run to take control of the contest before the break. At one point, the Jayhawks scored 11 unanswered points to grab a 39-30 advantage with 3:55 left in the first half.

It was a stretch that started with a pair of free throws by David McCormack to even things up at 30-30 at the 6:15 mark. McCormack then netted a bucket less than a minute later on a second-chance opportunity.

Bryce Thompson, who got his first career start on Friday, then followed things up with a driving layup. Kansas junior Ochai Agbaji added a couple of free throws before draining a 3-pointer to cap off the 11-0 run by KU.

More importantly, Saint Joseph’s was held scoreless between the 7:16 and 3:20 mark by KU’s defense.

• Offensive highlight: It took nearly 60 minutes of action, but Kansas recorded its first dunk of the 2020-21 campaign.

At the 11:49 mark in the first half, junior college transfer Tyon Grant-Foster had the honors of recording KU’s first slam of the season. He did so on baseline cut, where Jalen Wilson threaded a nice pass from the high post.

It was an important sequence for the Jayhawks, who struggled to finish at the rim on layups and didn’t have a dunk at all in the season opener against Gonzaga. According to BartTorvik, Kansas netted 143 dunks during a 28-3 campaign a season ago.

• Defensive highlight: The Jayhawks had some issues on the defensive end for the second day in a row, especially in the first half due to the way the opposition was attacking them.

Saint Joseph’s was able to stretch the floor, and get off a lot of good looks from beyond the arc against the Kansas defense. It was a problem that persisted during KU’s 102-90 loss to Gonzaga on Thursday in the season opener.

In the second half, Dajuan Harris had a heads-up play by taking a charge to force a turnover with 13:41 left to play. Moments later, Harris found Christian Braun for an alley-oop. Harris actually ended up drawing two charges for KU in the win.

The redshirt freshman guard was making plays in his first real collegiate action, so get used to seeing more of him moving forward.

"We needed a spark and he gave it to us," Self said of Harris on the FS1 broadcast. "I thought he was great defensively."

• Key stat: The Jayhawks struggled to finish at the rim in this one. Kansas went 14-for-26 on layup attempts on Friday. KU did make all three of its dunk attempts though.

• Up next: Kansas will face Kentucky at 8:30 p.m. Tuesday in the Champions Classic.

I usually cringe when he drives the lane but it seemed like Christian had more points in the paint today than all of last year combined.

I think you're forgetting about quite a few points last year if that's the case.

Christian is a player. That's all that needs to be said. What you have to like is that his game just gets better and better, he can play defense and he can rebound, he can pass, and he can dribble. And he can shoot the three. There is a lot to like.

Right now, it looks like 5man by committee. David will probably start, but Jalen Wilson will play a lot of minutes. He is starting to really impress me. He definitely has talent. Also a good all around game.

Harris was big, because it let's Marcus be the linebacker, that he is, without worrying too much about the offense. Especially with us struggling in the post, we need him to be able to free up on defense.

Enaruna had some good moments and he should be playing 10 to 15 minutes a game, and of course Bryce Thompson is just going to get better and better.

""We needed a spark and he gave it to us," Self said of Harris on the FS1 broadcast. "I thought he was great defensively.""

Not easy to predict who HCBS will play, but based on his comments and how DH played today, he should get a shot as KU's starting point guard. Very close to Devonte's defensive abilities and is able to run the offense very well.

Ball didn't stick, our offense looked so much better, especially with DJ on the floor. He made everybody in the team look good. True St.Joe ain't as lengthy as the Bulldogs, but we can see ball movement, passing, lobs, lots of FTs, assists. Defense looked better, too. We good?

After watching the football team go 0 for 7 I'm just glad to finally get in the win column.

KU will be fine. Coach Self will get a rotation going. And will reel in some of the sloppy defense and turnovers. It's still the beginning of the season, can't get overly optimistic or pessimistic at this point. They are still finding the right personnel and rhythm. But I do know that we have a lot of guys who can make 3's and that's not a bad thing to have, especially if they have length and athleticism to go with it.