When Les Miles fired Luke Meadows as Kansas football’s offensive line coach with just three weeks left in the season, it had plenty to do with the Jayhawks’ play up front throughout an 0-7 start.

While speaking Monday with media members for the first time since what Miles described as “a tough decision,” though, KU football’s head coach chose to focus on the future and how he thinks interim O-line coach John Morookian will help the blockers.

“We wanted our team to have the opportunity to improve and get better,” Miles said of his decision. “It just felt like going another direction was the thing to do.”

How much of a spark a staffing shakeup can provide between now and the Dec. 12 season finale remains to be seen. But Miles didn’t claim bringing in Morkookian, who was on staff as an offensive senior analyst, would lead to any specific achievements.

“We just felt like there was an opportunity to promote John Morookian and find out exactly what his view of line play is,” Miles said. “And I like his background, I like who he is.”

Morookian, a four-year starter on the offensive line for Toledo from 2008-11, starting 49 games in a row at right tackle, joined the KU staff in March of this year.

Before that, he already was working in the Big 12, as a quality control assistant at Iowa State for head coach Matt Campbell — a run-game coordinator and offensive coordinator at Toledo during the final three years of Morookians’ days as a right tackle.

Though the former O-lineman has only been a position coach for a few days at KU so far, Miles quickly appreciated the young coach’s approach.

“He jumped right in there,” Miles said. “Line coaches have the propensity to be right in their huddle and right around. And that was Morookian. He did a good job. He did a really good job.” 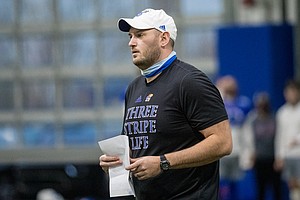 No KU offensive linemen were made available during the team’s weekly media session on Monday afternoon. But junior receiver Takulve “TK” Williams shared what he noticed about the O-linemen and how they have responded to having a new position coach.

“It looks like Coach John’s getting after them,” Williams attested.

The receiver acknowledged the transition might not be easy for KU’s O-linemen, given the situation and timing.

“Obviously their coach got fired. I’m sure it probably hurt them,” Williams said. “You grow a relationship with certain people.”

KU senior defensive lineman Sam Burt, who goes up against the O-linemen at every practice, thinks the coaching change has been a positive overall.

“I know the guys in the O-line room are pretty strong-willed. They’re very adaptable. I think they’re kind of taking it on with a little pep in their step,” Burt shared, “and just trying to adapt to their process and adapt to the changing circumstances as best as they can.”

While KU could end up eventually bringing in a different coach in the offseason to take over with the O-line, because Morookian has the interim tag attached to his job, Miles said he’s looking forward to seeing in the weeks ahead what kind of coach Morookian is.

According to Miles, he wants to learn about his new assistant’s points of view and methodology, and work with him to accomplish what’s possible in the short term.

“This will be, in my opinion, a nice format for he and I to describe and discuss about football,” Miles said. “That’s all. I think he’s a step forward.”

Burt said he’s looking forward to seeing what type of impact the coaching change will have along the O-line.

Williams, too, is curious to see how it plays out on the few Saturdays KU has left on its schedule.

“I can see that their effort’s still there,” Williams said. “We’ll see, like come game time, if you see any changes.”