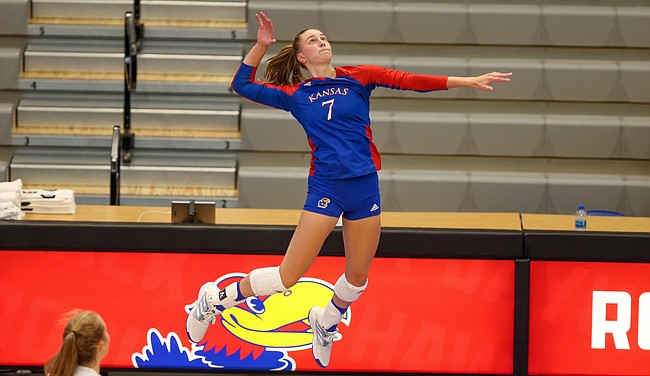 Four Big 12 Conference volleyball series, including one involving Kansas, have been postponed to next spring, conference officials announced Tuesday.

Dates and times have not yet been announced.

KU's 2020 season-finale series with TCU, previously scheduled for Dec. 3-4 in Fort Worth, Texas, will join Texas at TCU, Oklahoma at Iowa State and TCU at Oklahoma in being moved to 2021.

Kansas entered the week at 3-9 on the season, with two home matches versus Texas Tech on the slate for Thursday and Friday. Those matches will now mark the end KU's 2020 season.

The Horned Frogs, meanwhile, are currently 1-7 and the COVID-19 pandemic has forced the postponement of several TCU matches this season.

"We entered this fall season thankful for the opportunity to compete, knowing there would be a chance we would not complete our entire schedule," KU coach Ray Bechard told the Journal-World on Tuesday. "We look forward to traveling to TCU as part of our spring schedule."

As a result, the all-Big 12 volleyball awards and academic team will be announced in the spring once all conference matches are completed.

Top-ranked Texas, at 14-0, already has wrapped up the 2020 Big 12 title. The Longhorns have just two matches remaining and lead Baylor (11-3) by three games.

MATCHES MOVED TO THE SPRING

Oklahoma at Iowa State (no make-up date had been set)

TCU at Oklahoma (no make-up date had been set)