As one would expect from a team that has surrendered more sacks than any FBS program in the country, the Kansas Jayhawks focused much of their recent bye week on addressing a glaring issue.

With just three games remaining on the schedule, the Jayhawks emerged from their final week off feeling like they made strides on offense, specifically in the pass protection category.

Sophomore tight end Mason Fairchild told reporters on Monday that KU’s offensive players concentrated throughout recent practices on their intensity and physicality while coming off the line of scrimmage, as well as protecting the quarterback.

“I think that has gotten tremendously better over this bye week, and I think that will show on Saturday,” Fairchild added, referencing the Jayhawks’ home game against No. 22 Texas (2:30 p.m. kickoff, ESPN2).

Starting quarterback Jalon Daniels suffered an injury that limited him throughout recent practices when Oklahoma sacked him for the ninth time in KU’s blowout road loss on Nov. 7. In the four games in which Daniels has both started and remained in the game into the fourth quarter this year, he has been sacked 5.25 times per game. 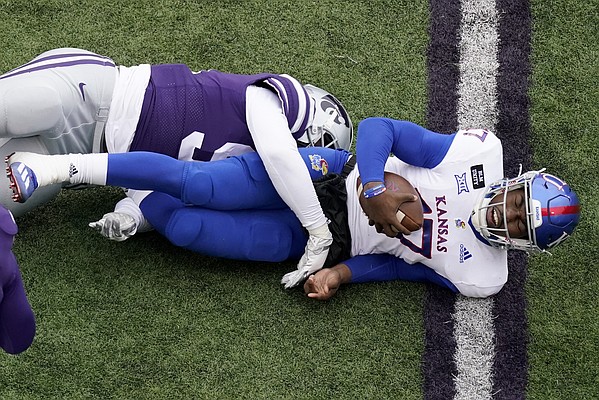 “Just getting the O-line used to twists and turns and everything that a defensive line and linebackers can do,” Fairchild explained, adding he thought those additional reps benefited both KU’s offensive linemen, as well as tight ends and fullbacks.

If KU’s coaches tinkered with personnel groupings along the offensive line during the time off, head coach Les Miles didn’t want to share such information publicly during his weekly press conference. But Miles said the staff focused on the offensive linemen throughout the bye week, with an eye on how the blockers up front were handling their jobs.

“The practice week that we just had was a very good practice week. A lot of energy,” Miles said, noting O-linemen showed development in how they were thinking about their assignments, too. “And they stayed after it. I’m really proud of how they practice.”

With pass protection proving to be a weakness throughout KU’s 0-7 start, the Jayhawks are averaging only 151.4 passing yards a game (111th nationally) and 4.8 yards per pass attempt (123rd).

The KU passing game is averaging 17.4 completions per game on 31.7 attempts an outing. The Jayhawks’ top two receivers this year, seniors Kwamie Lassiter II and Andrew Parchment have accounted for 54 of the team’s 122 receptions to date. Lassiter is averaging 10.5 yards per catch and 4.4 receptions a game. Parchment, who emerged in 2019 as one of KU’s top offensive players, currently averages 8.3 yards per catch and 3.3 receptions a game in 2020.

Lassiter said pass protection is an area where the KU offense must improve headed into the final three weeks.

“It helps build drives. It helps move drives, to make plays and score touchdowns,” Lassiter said. “So that’s something that we’ve been working on, and we’re going to see it improved this week.”

According to the senior receiver, the Jayhawks looked better during practices in terms of being in the right spots to preserve their QB.

All Fairchild could do was chuckle when asked about the coaches’ message to the players regarding pass protection, and he didn’t divulge any details of how those conversations were delivered.

The sophomore tight end said video clips from the loss at OU showed the Jayhawks’ obvious weaknesses in that facet of the game. And according to Fairchild, the offensive players who block on passing downs plan to make that duty a point of pride, coming off the team’s final bye week of the year.

“We can’t have (the QB) running around for his life back there,” Fairchild said.

As usual, everything SOUNDS good. Let's see if it actually translates on Saturday.

Our passing game is a little better than our run game. UT has a good rush defense but not great at pass defense. Let’s throw the ball. What do we have to lose.

IF an o lineman can stand in front of a defender it would be an improvement. Man up!

I get what Les Miles is trying to do, but he doesn't yet have the personnel. I'm just going to caution the fans, it will be at least his 4th season before we start to dig ourselves out of the cellar. Expecting it faster is unrealistic. I can get fans telling the O-Line to man up, but some fans need to man up too.