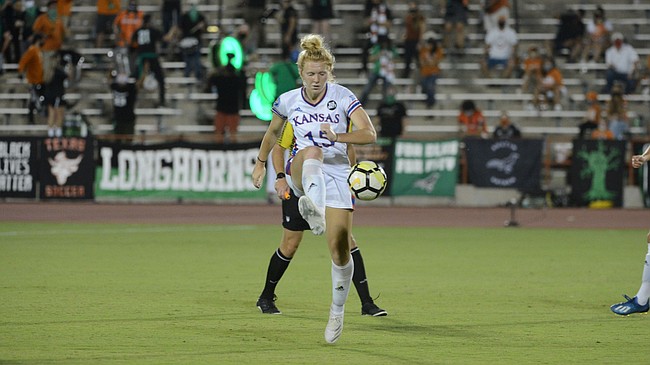 The Kansas women’s soccer team saved its best for last, clobbering Oklahoma, 4-1, in the season finale on Sunday at Rock Chalk Park.

The win marked the first time this season that the Jayhawks (5-3-1) scored more than one goal in a game and wrapped up a fourth-place finish in the Big 12 Conference during the pandemic shortened 2020 season.

KU scored three first-half goals, including one from Italia Bradley just five minutes into the game, and the defense was up to the task of making sure that the home team did not have to sweat this one out.

Senior Ceri Holland, who led Kansas with three goals this season, capped her career with a three-assist afternoon.

Sunday’s outing marked the 75th consecutive start of Holland’s career, making her just the 14th Jayhawk to start every match of her Kansas career. Her 75 consecutive starts sit fourth on KU’s all-time list.

Oklahoma’s Cameron Tharp scored in the 81st minute to end the Jayhawks’ bid for their fifth shutout of the season.

“Finishing 5-3-1 in this league is not easy to do,” KU coach Mark Francis said after the match. “Credit to the kids for that. It’s been a different season for everybody and for us, too. We’re just glad we got to play. Hopefully, we’ll get to play in the spring.”

The NCAA is planning to host a soccer championship in the spring of 2021, fielding a 48-team bracket instead of 64.

Thirty-one of those teams will be automatic qualifiers and 17 will receive at-large bids. TCU won the Big 12’s automatic spot in the field.

Teams will be allowed to play regular season matches in the spring from Feb. 3 through April 17. Selections for the postseason will be announced on April 18 and the NCAA’s championship weekend will be held May 13-17.