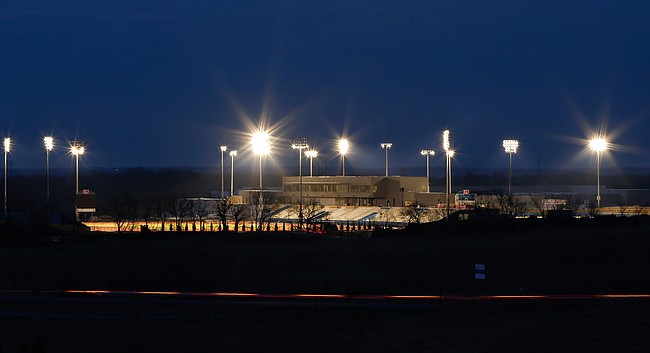 From a view looking north, the lights of the Rock Chalk Sports Park illuminate the facilities on Monday, April 7, 2014.

Six members of the Kansas track and field teams were recognized as All-Americans for their performances during the 2019-20 indoor season, the U.S. Track & Field and Cross Country Coaches Association announced this week.

Caldwell and Dickerson became first-time All-American recipients, while Dudarev received the distinction for the fifth time in his KU career, Bradford and Finley for the third time and Kuykendoll for the second.

Dudarev’s indoor campaign was among the most notable in the country during the 2019-20 season.

He set the best mark in NCAA competition in the men’s weight throw at the Jayhawk Classic on Jan. 23, throwing 80 feet, which was the farthest attempt at the event since 2015.

Dudarev also went on to win his third indoor conference title at the Big 12 Indoor Championship in late February and held the top seven throws in the country during the indoor season.

Bradford, meanwhile, broke the KU record in the pole vault on two occasions during the 2019-20 indoor season. He also delivered the ninth-best mark in NCAA history by clearing 19 feet, 1.25 inches at the Tyson Invitational.

Bradford took home a silver medal from the Big 12 Indoor Championship by tying a meet record with a jump of 18 feet, 11 inches.

That time was good enough for second at the Big 12 Indoor Championship and also was the seventh-best mark in school history.

Sad that these athletes also missed their chance for even greater accomplishments & recognition. Glad to see we’re moving back towards normal.

"Bradford took home a silver medal from the Big 12 Indoor Championship by tying a meet record with a jump of 18 feet, 11 inches."

That doesn't make sense. If he tied a meet record, how could he finish second?