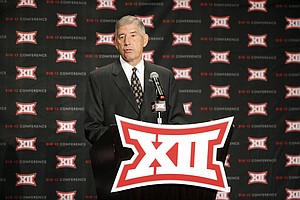 I'm still pissed at Bob Bowlsby for ripping the Big 12 Tournament from us. I'm tired of seeing healthy people like us having our pleasures ripped from us because there is a fraction of a percentage of a chance we might get sick.

Get sick and give it to your family. Great idea.

That didn't happen. The Hong Kong flu happened before Woodstock, look up the dates on Wikipedia.

I suppose there's an argument for ignoring covid 19 and allowing it to take its course, weeding out the frail and weak and creating a herd immunity that allows the rest of us to live our lives without the inconvenience of missing things like athletic competition. But I would not want to be the person who plays God and make the announcement that a certain segment of our population is expendable.

"'It really depends on how things go between now and then,' he said, noting that 80,000-seat stadiums could face the reality of having just 20,000 fans present due to social distancing requirements."

It looks like the playing field has finally been leveled (or stands in this case.)

I think the odds of fans being in the stands for games in the fall is not zero, but it's closer than that to 100%. Easy. Sports and events are going to be TV shows before they become events that folks go back to.

Understand, im not advocating that position. But there's already serious talk amongst most big state universities to not even have students back on campus until the spring semester of 2021. They're not going to have fans in the stands if there are not kids on campus.

Just assume most sports are going to be on TV and not events we go to for awhile.

IIRC, the NCAA said that they wouldn't allow competitions until the general students are allowed back on campus, so if students wouldn't be back till January, the whole fall semester schedule would be without sports. No football, and maybe fewer BB games.

Hey Bryce, almost 100k dead. Each one with a spouse or kid or grandkid or friend.

If anyone ever wanted to know which one is the weakest nation on earth, the soft one, the pathetic one....just read comments from pathetic piles of cowardice like Bryce and Suzi. Two weaklings. No discipline. No toughness. No teamwork. Just ME.

"...80,000-seat stadiums could face the reality of having just 20,000 fans present due to social distancing requirements." Only 20k fans? No problem for KU football.

We averaged a little under 30k last year so 20 should be no problem. But if they are reducing capacity by 25 percent then Memorial could allow only 12,500.