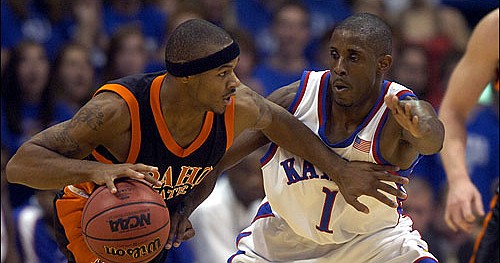 Hawkins had coached the eighth grade boys team at Pembroke Hill during the 2019-20 season.

A native of Kansas City, Kan., Hawkins played at KU for both Roy Williams and Bill Self. He also coached boys basketball at Perry-Lecompton High for four seasons.

His coaching exploits have extended to getting involved with developing young players in Lawrence and around Kansas City through his camps and clinics.

"I'm really excited about the opportunity," Hawkins said in a news release announcing the move. "Academics are very important to me, which is why the position drew me in. I had the chance to be a substitute for the lower school last year and I was very impressed with the student-teacher interactions."

In addition to coaching basketball, Hawkins also will serve as the full-time substitute teacher at Pembroke Hill's Ward Parkway campus.

Asked what style he would bring to the Pembroke basketball program, Hawkins pointed to areas of emphasis from his past KU coaches.

"We're going to play solid defense and up-tempo and create an electric atmosphere that our community and visitors are going to want to come see us play," he said.

"We believe his personality, his experience and his ability to connect with students will help grow our boys basketball program," Cole said in the release.

I don't know anyone more deserving of this opportunity than Jeff Hawkins.

Congrats Jeff .......another limb on the coaching tree .