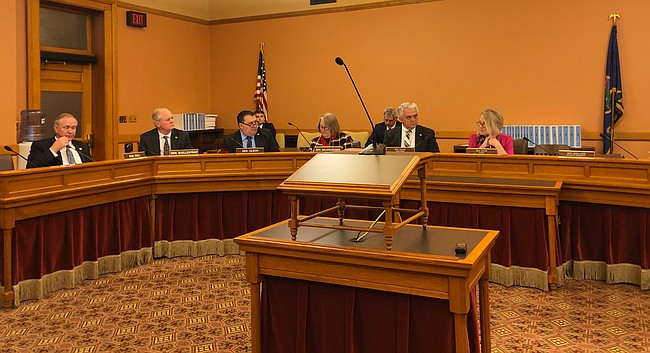 Members of the Kansas Senate Commerce Committee confer on March 10, 2020, at the Statehouse in Topeka.

The state of Kansas is one step closer to a law that would allow student-athletes in the state to profit off the use of their name, image and likeness while in school — provided 15 other states pass legislation first.

Members of the Kansas Senate Commerce Committee on Tuesday easily advanced Senate Bill 474 to a vote of the full Senate with virtually no discussion.

Kansas' legislation, which was prompted in part by a landmark California law passed in 2019 that takes effect in 2023, stipulates that a university like KU would be unable to create a rule prohibiting a student-athlete from earning money for the use of his or her name, image or likeness. If an athlete does earn money, that compensation can’t be counted against the athlete’s eligibility for a scholarship.

The bill also says that the colleges and their athletic departments still are not able to pay athletes for their names, images or likenesses, meaning athletes wouldn't profit from apparel deals their school has in place, for example. The freedom to earn money comes from the athlete’s ability to negotiate with third-party entities that partner with an athlete to promote a product, such as video games or apparel.

Student-athletes could be represented by a certified agent or attorney for any negotiations with a third-party entity — free from any interference by the university or its athletic department, as long as the third-party contract doesn’t violate any standing agreement those departments have with another company.

Sen. Tom Holland, D-Lawrence, sits on the Commerce Committee, but wasn't able to attend Tuesday's brief meeting. He told the Journal-World afterward that he would've voted for the bill and expects it to easily pass the full Senate.

Most importantly, he said, it offers Kansas schools a chance to remain competitive during the recruiting process. Even though Kansas isn't leading the pack on the issue — by way of letting 15 other states pass legislation first — it's key for the processes to be worked out now.

“Can we keep our sports programs competitive with stuff that’s going on in California and elsewhere at the national level?” he said. “This is a first step, it continues the conversation, and we’ll see where it goes.”

Holland said the best case scenario would be if the federal government was able to pass a uniform set of standards for college athletes’ use of their names and images. That process, though, is slow-moving. The three measures in the U.S. House of Representatives addressing student-athlete compensation have been stuck in committees since early 2019.

It's currently unclear when the full Kansas Senate may take the legislation up for discussion.

This is really sad. But, KU/Kansas is doing what it needs to in order to keep up with CA. And soon we will be back to the days of paid players playing for UCLA....the largest schools in the largest markets....signing all the players......Companies Like NIKE will negotiate deals with athletes where if the athlete signs with the NIKE they will get an apparel deal worth a million dollars and then NIKE will gather the five best players at the school of NIKE's choice.

IMO, this could be the demise of Midwest schools competing on an even playing field.

Further, whats going to stop any booster from printing up a 1000 tshirts saying he is an apparel company and then paying the players to put their faces on it. This opens up so much more corruption it's not even funny.

Good points, but I hope you're wrong and the Fed has enough insight not to let that happen. Another disturbing piece of legislation coming up is allowing athletes to immediately transfer without sitting a year.