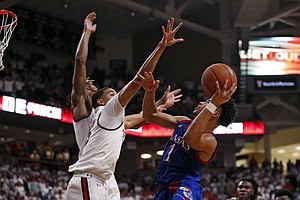 As a Kansas fan/alum, I LOATHE this tournament. It's a huge distraction and waste of energy getting ready for the NCAAT. Kansas has absolutely nothing to gain....everything to lose playing these tournament. Regardless, it is a ton of fun and I enjoy seeing all of Ames, IA show up. More important, I'm hoping KU goes south taking the Omaha/Houston road to Atlanta.

What the hell is the matter with you??? I'd rather that those Cry-Clown fans stay home and stop turning Sprint Center into Hilton Coliseum South!

I always enjoyed attending the Tournament when I could. It started getting too pricey to attend and I had better beer, seat, and view from my sofa/big screen. So I will go for anything that extends the season a few more games. It's going to be 7 months without any games. Stock up the memories!

Isn't it St. Louis to Houston in the South regional?

1] Having won the Big 12 regular season title [which is the one that counts in my opinion], winning the Tourney takes on a lesser priority than being 100% for the NCAA.

2] Simplest solution, win the first game, lose the second in a close match then get almost a week to rest up and get everybody healed.

4] Definitely Houston..KU fans will show up any where and a Houston pick would force Baylor elsewhere.

5] Next season's team looks to be pretty damn good with Big Mac, Mitch, Ochai, Silvio [yes, Silvio], Christian, Tristan, Marcus, Jalen and whomever else they can recruit.

6] MVP?????? As great as Dok has been, this team doesn't go anywhere without the little engine that could.....Devon.

5] People keep writing about Silvio leaving, I agree, he'll be playing for KU next season. For starters, this is where He wanted to play, not where his "guardian" had him lined up. Secondly, he really came through in crunch time that freshman year, moreover, Coach likes him, he's never said anything derogatory about Silvio. Thirdly, he'll be a senior, a senior with less than a season of playing time under his belt, but he has practiced with the team for three years already, where's he going to go? I don't see him wanting to leave and I don't see Coach encouraging him to do so. He's not like some of the others that have come and gone, really, other than the KSU malay, where he has taken the brunt of the punishment, the issues surrounding him have not been of his doing.

Laugh all you want, but I still don't think we play as a team yet. At least we're still winning right? I still don't see kids picking up their teammates falling on the ground chasing loose ball or getting hammered. Not as spontaneous as other teams have shown. Maybe it's coach's strategy, but I still see a lot could've been done differently when kids going all the way to the basket, failed to score. If we are to play as a team, brotherhood/camaraderie is a must - if that feeling is not there, we're going to fall before even reach the FF. Trust me.

I mean that respectfully.

There's just no pleasing some people.

Suzi - As nice as it would be to completely rest the 3, we don’t have enough players.

We may not be able to completely rest the big 3, but they should't be playing more than 20 minutes each at the most. It's such a huge risk of injury, with nothing to be gained. We're going to be the overall number 1 seed no matter what happens in the Big XII tourney.

Translation: It's unlikely anybody gets substantial rest.

On one hand, anyone involved in basketball at this level is an intense competitor and never, never plays to lose. On the other, Self has made it abundantly clear over the years that he hates this tournament (so do I). This team is used to playing 2 games a week. I wouldn't want to give them too much rest, because it could throw off their rhythm.

Because it's functionally home games for us in the Big 12 Tournament, sure it'd be nice to win.

I'd probably feel differently if we TIED Baylor and could win the Big 12 "OT" style.

If we can win our first game, I'd almost sit the main guys the entire 2nd halfs of the remaining games.

Problem is, Self is so competitive, I could see him putting guys back in to make sure we win.

Any KU basketball game is a good one to have.

This is a true rarity in which, we could lose the first game and still be the number 1 overall seed for the NCAAs.

I think they might dangle Indianapolis or Houston over our heads or Omaha or St Louis...either way KU will travel so, I'm not sure which one is best.

Last year and this year, the difference was that the team learned to win on the road. Road teams in my perceived bias helps during the tourney. I feel that this year we have a good lineup for a great run.

I'm sure one or more of these will end up as a two, but last week this was the consensus.

Kansas, Baylor, Gonzaga, Dayton. All but Kansas seems like a 3 line.

If you saw those lines, which one would you say is the 1 line and which one the 3 line.

Should be an exciting tourney.

I know the guys could use a break, I also know Coach likes to win, what I'm curious about are the ethical questions surrounding not putting your best team on the floor? We all know betting will be involved in who will be the Big XII tournament champion, with money on the game is it ethical not to try to win by resting your better players? By Coach saying he "could" rest some guys, is that signaling that you should be careful where you put your money? I don't bet, winning bets takes luck, a commodity I've always been short on, so I just wonder what your opinions are.

One thing to consider... the St. Louis/Houston route gives us an extra 2 days rest in preparation for the sweet 16 games!