The Kansas women's basketball team ended the regular season by falling to its in-state rival. The Jayhawks suffered an 83-63 loss to Kansas State on Sunday afternoon in the Sunflower Showdown at Bramlage Coliseum.

Kansas State came out firing in the first quarter and took a 9-0 lead with 6:39 remaining, which forced Kansas to call an early timeout. The Jayhawks played from behind the rest of the game, as the Wildcats had a lead for 36-plus minutes.

Freshman Holly Kersgieter, who came off the bench, paced KU with 21 points. She shot 7 of 9 from the floor, going 4-for-5 from long range. It was the third time that Kersgieter has scored 20 or more points in a game this year. 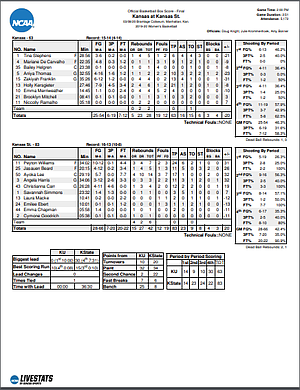 Freshman Zakiyah Franklin finished with 13 points on 6 of 12 shooting along with four rebounds and four assists. Junior Tina Stephens had 6 points and a season-high four assists to lead the team. Stephens also led the team in steals with three.

Kansas will be the 10th seed in the Big 12 Tournament this week, which is slated to take place at Municipal Auditorium in Kansas City, Mo. KU will face No. 7 Texas Tech at 8:30 p.m. Thursday.

Saying that KU played from behind after falling behind 9-0 is not correct, as they rallied back to close out the 1st quarter tied at 14-14. It hardly mattered though, as they fell behind by 10 midway through the 2nd quarter, and eventually went down by 30+ before coming back a little in garbage time in the last few minutes.

Listening to the play-by-play, it sounded like they were going through the motions, and just wanted to get it over with. Maybe it wasn't that way at all, but regardless, it definitely wasn't much of a game. Pretty disappointing, maybe disgusting is more accurate, given the potential shown in that recent four-game stretch containing three impressive wins.

A bad end to another terrible season in an endless string of losing seasons. This coach can now claim averaging slightly over 2.0 conference wins per season. Despite this miserable record he can rest easy, secure in his job because at the KUAD no coaches are fired for horrible results on the field.

i watched the game on espn+. ku has improved this year. they fought throughout and never gave up. it would be a terrible move to fire the coach now as his best players are frosh.

Saying that a coaches’ best players are freshmen works better when he’s not in the fifth year of his contract. I would suspect that this decision will be a buyout decision. If it costs too much to fire him, then Long might keep him.

Schneider fell hard for the transfer trap his first year in. And we haven’t recovered. The question, though, is can you find someone better? KU keeps driving programs into the ditch, which makes it harder to find good coaches to take the job.

What recruits do we have coming next year?

This coach needs to go. As soon as the season is over, make the move.

KU will be the 10th seed is another way for saying they were dead last in the conference......again.

Cut/paste from football comment: If he does indeed have a good group of young kids, then next year HAS to show marked improvement. If they don't, then time to cut bait. But if they have potential, then it wouldn't make sense to fire him now. Hopefully have a good recruiting class in the works?